Modelling the Non-Separability of a Very Complex World (Lisbon) 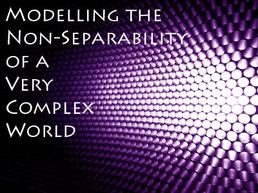 Satellite Session at the ECCS'10 European Conference on Complex Systems

We live in a very complex world. Much of this complexity manifests itself in ways that are becoming increasingly well understood by practitioners of Complex Systems Science (CSS), and yet some systems appear to be consistently defying our understanding. Throughout the current incarnation of CSS, some methods and approaches have posited a link between contextuality, or non-separability, and complexity, (see for example, [2–7]) but very little has come from these works.

Is the problem too complex?

While Complex System Science has traditionally addressed non-separable behaviour ‘within systems, this workshop will seek to highlight approaches that model situations of contextuality, where a system depends in a profound manner upon factors traditionally deemed ‘external' to it. Such factors might include: measurement; historical contingency; environmental conditions; cultural assumptions and mental states in human systems; etc. Importantly, contextually dependent systems sometimes exhibit incompatibility between different contexts and yet this important factor is very rarely acknowledged, let alone modelled, in CSS.

Issues of contextuality have traditionally been addressed in quantum physics and in linguistics, with applications covering particle physics, artificial intelligence and machine learning. To the everyday applied scientist and practitioner, this concern may appear somehow arcane and closer to the philosophy of science than to the lab desk or the field work. However, it is now clear that many real world problems of immense technological, economic and social impact cannot be properly addressed without accounting for non-separability. We mention just three examples in the fields of computer science, economics and social science: the semantic web and machine translation cannot be achieved without addressing the ’meaning’ of natural written language; disregarding any human behaviour outside the scope of ’home economics’ can have tragic impacts in the porting of economic theory into policy making, as has been clear in the last couple of years; discounting human perception of risk and the subtitles of negotiation profoundly impacts the ability of community to address common problems of the magnitude of climate change. We believe CSS still lacks a formal approach to these problems and we wish to explore some possible avenues.

This workshop will seek to highlight, compare and contrast innovative attempts to model the contextuality and non-locality of very complex systems. Such behaviour is often taken as indicative of ‘holism’ in the field, but we feel that such behaviour has a number of characteristics, all of which can be made more specific. Thus, while holism is a term frequently associated with Complex Systems Science, it has yet to be truly incorporated into the analytical modelling of complex systems. This workshop seeks to generate new interest in the actual modelling of (rather than the philosophising about) effects that currently defy the techniques in vogue in CSS.

We expect the workshop will be of interest to any person working on the analytical and theoretical modelling of complexity, but of particular interest to those who are attempting to model systems displaying very complex behaviour.

The workshop will focus on a limited and highly selected number of contributions and will devote ample time to group discussions. We anticipate inviting 3-4 keynote speakers. The workshop will be subdivided in a number of sessions, each consisting of an invited talk, a set of contributed talks and extensive time for discussion and comment. This discussion session will take a panel form, with the panel formed from a combination of each speaker from the session, together with the session chair. Should many high quality contributions be submitted we will consider the option of poster presentations.

Post-workshop, a series of particularly promising talks and approaches will be identified, and the authors invited to contribute a detailed article to a special issue on 'Non-separability and contextuality of complex systems'. Provisional support for this idea has been obtained from The International Journal of General Systems. Additionally, it is anticipated that the interactions that will emerge during this workshop will be of interest to the broader CSS community not at the conference itself. For this reason, both the talks, and the ensuring discussions will be recorded and made available online.

Causal Decompositions of Spacetime. Presumably, emergent patterns and causal explanation are related. Typically, one strives to explain a system’s organization in terms of underlying mechanisms. But the enterprise is confounded by measurement distortion, nonlinearity, and subjectivity. I will show that pattern and causality are connected, in a principled way, by analyzing a system’s information storage and processing.

Endogenous versus Exogenous Origins of Crises and Triumphs. We discover a generic dynamical law characterizing the activity of systems going to and following a peak, a crisis or a climax. A deep relationship is uncovered between the response to exogenous shocks and the endogenous fluctuations of the activity of systems driven by the epidemic-like interactions, such as word-of-mouth contacts in social networks and triggering processes in natural systems. This constitutes a kind of generalized fluctuation-susceptibility theorem of such 'out of equilibrium' systems with punctuated dynamics. Applications include the dynamics of commercial sales, YouTube video successes, financial volatility shocks, market crashes, bursts of cyber-risks, social conflicts and crises, epileptic seizures, earthquakes, landslides, climate dynamics and so on.

Contextuality and Non-Separability in the Philosophy of Quantum Physics. To account for Einstein-Podolsky-Rosen correlations (which are underpinned by the entanglement of corresponding state vectors), one is usually left with a choice between renouncing the claim that quantum mechanics is a complete description of reality and renouncing some form of locality. Yet, it has recently been shown that a coherent application of the relational interpretation of quantum mechanics bypasses this dilemma. Provided one accepts that states as well as properties are relative to certain experimental operations, one can stick to locality without supposing that quantum theory is incomplete. In other terms, one can recover locality and completeness provided contextuality is fully taken into account (although, at this point, completeness has lost its usual realist meaning). Non-separability is then interpreted as an outcome of the whole situation of production of phenomena, rather than a feature of the objects that allegedly manifest through these phenomena. In this talk, I will examine successive versions of this contextual approach of non-separability. These versions sometimes appear as conflicting, since they arise from either radical empiricism or extreme formalism, but they have a common root that is well-displayed by the relational interpretation of quantum mechanics. Some objections to the contextual approach of non-separability are finally discussed and rebutted.

Social Tagging, Guppy Effect, and the Role of Interference: Social tagging systems are shown to evidence a well-known cognitive heuristic, the guppy effect, which arises from the combination of different concepts. We present some empirical evidence of this effect, drawn from a popular social tagging Web service. The guppy effect is then described using a quantum inspired formalism that has been already successfully applied to model conjunction fallacy and probability judgement errors. Key to the formalism is the concept of interference, which is able to capture and quantify the strength of the guppy effect.

Syntactic Order for Free: Taking the influential, reductionist characterization of the human language faculty by Hauser, Chomsky, and Fitch (2002), I argue that a separationist approach to this central cognitive attribute faces challenges that a more emergentist position avoids. I then turn to a characterization of natural language syntax as a complex dynamic system that is capable of producing attested structures (here claimed to be Turing patterns) in the absence of traditional lexical supervision. The contribution concludes with an analysis of the cognitive ecology of the language faculty, and how language relates to/interfaces with mental modules.

Meaning in Context: Language exhibits a number of contextuality and non-separability effects. This paper reviews a new set of models showing promise for capturing this complexity which are based upon a quantum-like approach.

Following the individual presentations and discussions, this workshop will conclude with a discussion panel: "Is CSS ‘Complex’ Enough?" where all workshop participants will have a chance to consider the future of CSS. This session will aim to build upon synergies and cross-fertilisations which arose during the course of the day, exploring possible future avenues for investigation.

School of Computing, University of Kent