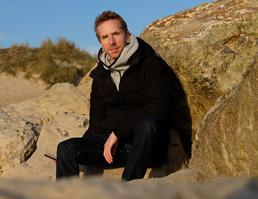 I came to Southampton in 2004 following ten years working the film and television industry in post-production, and subsequently satellite communications. My education in Southampton began with the Foundation Year followed by a degree in Civil Engineering and then my PhD was in Immunology. This was an interdisciplinary project working across the immunology, structural biology, and systems biology.

Presently, I am a post-doctoral research fellow at of the Centre for Proteomic Research and the Cancer Sciences Unit. I am also a qualified Data Carpentry and Software Carpentry Instructor.

My research is primarily into the MHC class I antigen processing and presentation pathway.

Major histocompatibility complex class I molecules (MHC I) present small fragments of other molecules called peptides to our immune systems at the surface of almost all cells. The function of MHC I molecules is to select peptides and present them like a billboard indicating what is inside our cells. This is the key mechanism by which our cells inform our immune systems as to whether they are healthy, or have become cancerous, or become infected by pathogens such as viruses or bacteria.

My PhD project used molecular dynamics simulations to explore the relationship between the structure of MHC I molecules, the way they move, and their peptide selection function.

The reason this is an interesting problem to study is that by understanding this process, one might deliberately seek to modulate it such that peptides are either presented or not presented. This could be useful in stimulating or down regulating an immune response, for example to make cancer more visible or to prevent an auto-immune response.

In 2014 I began learning R and have subsequently become interested in many aspects of data science, statistics and reproducibility of research. This has led to side projects in bioinformatics such as looking the transcriptome of the Tasmanian Devil, as well as my involvement with the Software Sustainability Institute and their work with Data Carpentry and Software Carpentry. 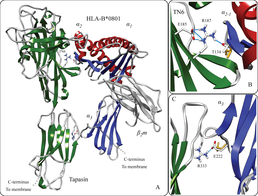 MHC Class I docking with Tapasin:

Tapasin is depicted in green and MHC Class I allele HLA-B*0801 is depicted with the heavy chain in blue and red and the B2m sub-unit in grey:

(A) The docking of Tapasin and MHC is driven by biochemical interaction information. The TN6 region of Tapasin identified by Dong et al. is docked using HADDOCK with residue T134 of MHC. T134 has been identified as key to Tapasin-MHC interaction. An open structure of MHC Class I allele HLA-B0801 (pdb ID: 1agb) is generated by molecular dynamic simulation. The human Tapasin structure is completed from the crystal structure (pdb ID: 38fu) using homology modelling.

(B) Tapasin residue R187 of the TN6 region nds a favourable interaction with T134. The side chain of T134 of the peptide-bound crystal Structure of HLA-B*0801 is depicted in gold and the docked structures side chains are shown in red, white and blue. Movement of the alpha2-1 helix (red) widens the F-pocket at the peptide C-terminus by about 3 Angstroms as previously observed by Sieker et al. This movement of the alpha2-1 helix corresponds with a movement of T134 by about 2 Angstroms from the closed structure to nd its interaction with R187 on Tapasin in this simulation. E185 on Tapasin appears to form a structural interaction with R187.

(C) Colours as panels B. The simulation independently identifies a favourable C-terminus interaction between Tapasin residue R333 and E222 on MHC. An E222K mutation of murine MHC allele H2-Dd has been shown to prevent binding to Tapasin. 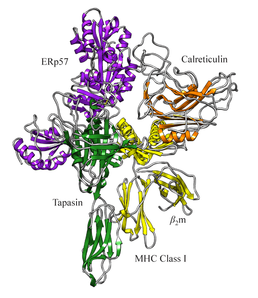 A model structure of Calreticulin (orange) is positioned approximately with the glycan binding sites close to that of MHC I and the proline domain tip close to the domain residues of ERp57 with which it is believed to interact.

TAP is not shown as no structure is available. 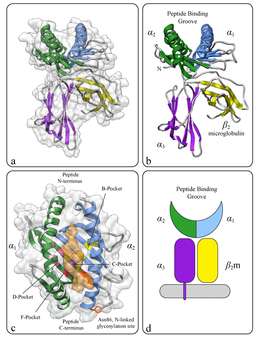 (a) A Van der Waals surface representation of lumenal domains of HLA-B*0801 heterodimer.

(b) A ribbon representation indicating Ig-type 3 domain, 1 and 2 helices and  sheets create the peptide binding groove. The alpha-2 helix is thought to be where Tapasin interacts. Ig-type protein B2m is noncovalently bound, but provides rigidity to the protein.

(c) Plan view of the peptide binding groove with a bound peptide coloured orange. It is the most polymorphic part of MHC Class I proteins, where 8-10 residue peptides bind forming complexes for presentation to CD8+ T-Cells. Pockets identified as anchors for the peptide are annotated B in yellow, C in dark blue, D in pink and F in red.

(d) A cartoon representation of MHC Class I structure indicating the transmembrane nature of the protein with the C-terminus tail that extends across membranes which is not seen in the lumenal domains comprising the crystal structures shown in (a) or (b). 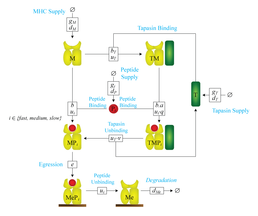 A kinetic model of peptide editing:

Crossed circles represent generation or degradation of a protein species. 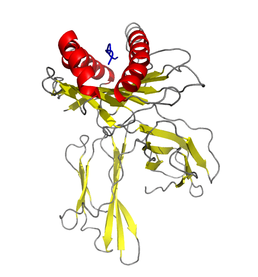 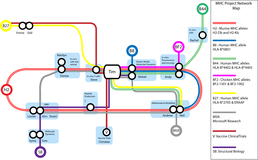 Project Map showing all the people, techniques and alleles involved 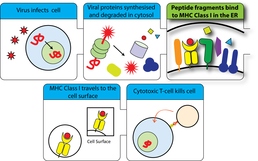