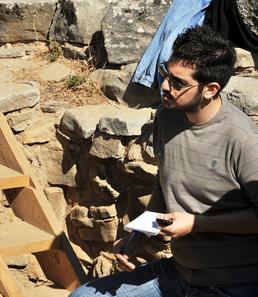 Costas Papadopoulos was born and grew up in Piraeus, Greece. He studied history and archaeology at the University of Crete, and graduated in 2007 with a First Class result. During his studies he got prizes from the State’s Scholarships Foundation and the Merchant Seamen’s Fund for his excellent performance. He continued his studies at the University of Southampton receiving a Master of Science in Archaeological Computing (Virtual Pasts) and is especially interested in computer-based analysis of virtual reconstructions as valuable tools to provide a better understanding of the past. He graduated with distinction and is now a PhD student at the University of Southampton, developing his skills on modern methodological tools and virtual reality in archaeology, attempting a spatial analysis of Greek Neolithic domestic occupation.

His research interests are mainly focused on prehistory, and especially on the way that sophisticated technologies (virtual reality, laser scanning, photogrammetry) enable analytical comparisons of architectural datasets currently reduced to abstract plans and elevations. The consequent interpretations provide invaluable information for the tangible and intangible elements of prehistoric culture, which are not accessible by conventional means.

He has taken part in the excavation of the peak sanctuary of Vrysinas (Director Prof. Iris Tzachili) and work as a supervisor archaeologist and IT specialist at Zominthos Project (Director Prof Yannis Sakellarakis). He has also participated in excavations in Koutroulou Magoula and Paliambela as well as in the surveys of Vrysinas and Thirasia (Director Prof. Iris Tzachili). He founded, the amateur team “Modern Archaeological Documentaries,” which takes part in National and International Festivals. He is also a member of the Archaeological Computing Research Group (ACRG) of the University of Southampton and elected member of the Institute for Archaeologists (IFA).

He has presented his work at the 2nd Conference of Prehistoric Archaeology, Computer Applications, and Quantitative Methods in Archaeology UK & International (CAA), Virtual Reality, Archaeology and Cultural Heritage (VAST), Visualisation in Archaeology (ViA) and the Theoretical Archaeology Group (TAG). These proceedings, as well as his dissertation entitled Death Management & Virtual Pursuits: A virtual reconstruction of the Minoan cemetery at Phourni, Archanes, examining the use of Tholos Tomb C and Burial Building 19 and the role of illumination, in relation to mortuary practices and the perception of life and death by the living have been published or are in the process of publication. 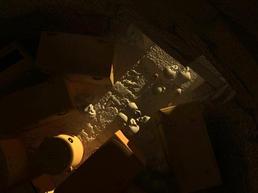 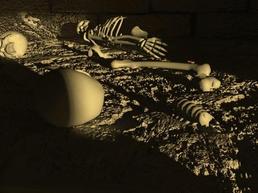 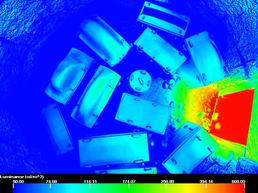 Luminance Values for the interior of Tholos Tomb C, on the 30th of April, 2pm.