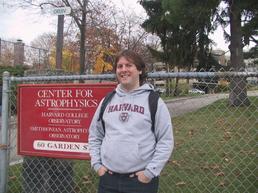 For my PhD project in the Applied Mathematics Group, I am studying singular vortices in Bose-Einstein Condensates with atomic spin degrees of freedom.

Bose-Einstein Condensates are atomic gases, held in a vacuum chamber at low densities and cooled to very near absolute zero. In this regime, quantum-mechanical effects which are ordinarily only observable on atomic distance scales manifest themselves in the behaviour of the entire gas. One instance of this is the formation of quantised vortices - similar to a bathtub vortex but free from friction or viscosity. These vortices will never naturally dissipate.

My PhD project is concerned with finding the lowest-energy configurations of vortices, as these are the states which will be observed in experiments. In particular, I am interested in the structures of the vortex cores when atomic spin degrees of freedom are accounted for. I use numerical algorithms written in Fortran, running on the Iridis cluster, to find these states and then interpret the results in the context of the symmetries of the system.

I attained my MPhys in Physics with Astronomy with a Year Abroad from Southampton in 2009, carrying out a year research project at the Harvard-Smithsonian Centre for Astrophysics in my final year. I studied observational data on quasars - extremely bright objects at the centres of distant galaxies - to search for structure in the central regions of these galaxies. I maintain an interest in extragalactic astrophysics and hope to apply my developing theoretical skills to problems in that field in the future.