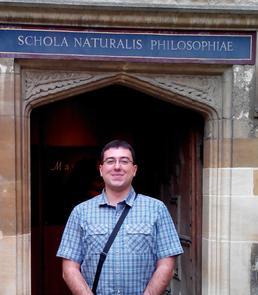 My background is in Mathematical Physics and my master thesis was about some specific applications of Random Matrix Theory to orthogonal polynomials and complex networks. In 2013 I joined the Electronics and Computer Science Department of the University of Southampton for a summer internship about complex networks models for growing networks with fitness and traffic formation.

I am currently enrolled in the first year of the Doctoral Training programme at the Institute for Complex Systems Simulation at the University of Southampton. My position is funded by the EPSRC.

My actual research focuses on the use of non-extensive entropy distributions to growing network models with fitness. These models can be formally mapped into physical systems showing peculiar phenomena (i.e. Bose-Einstein condensation) but they also exhibit peculiar out-of-equilibrium features and require the use of a statistical mechanics ensembles different from Boltzmann's ones. The development of a coherent theoretical framework would be a resounding success not only in terms of our understanding of out-of-equilibrium systems but also for the many possible modelling applications to real-world networks.

Now, some more info about me...

In 2005 I took part in the Extreme Energy Events project funded by MIUR and INFN. During a one week training period at CERN we built 3 MRPC revelators, which were later used for data analysis on cosmic rays data in Italian high schools.

In 2012 I worked as physics teacher for the European project "Surf Your Learning - Test No Problem" in Brindisi, Italy. This experience motivated me to publish an ebook with 260 solved exercises on the physics teached in high schools, ranging from physical quantities to quantum physics, from thermodynamics to geometrical optics, from electromagnetism to classical mechanics.

Starting from 2009, I am also working with CRIL (Centro di Ricerca Interdisciplinare sul Linguaggio) at Universita' del Salento about the numerical instabilities showed by the mathematical models used for sensor position tracking in some electromagnetic articulographers. Between 2012 and 2013 this collaboration brought to 2 publications and a conference talk.