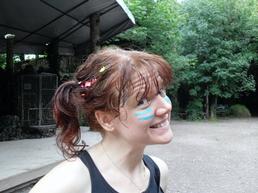 Marine ecosystem models have an important role to play for both diagnosis and predictions in fields such as global fisheries and climate change. There has been a recent move towards using individual-based or Lagrangian models, as these are felt to be more 'realistic' and potentially to hold more accuracy. I am interested in the methodology underlying these models, as assumptions are often made without being rigorously tested. Areas such as random walks and the decision to include photoacclimation are often investigated in abstract, without fully exploring how the ecosystem as a whole is affected. The question of whether the addition of extra complexity create realism, or whether it merely introduces new sources of error to ecosystem models is one that is hotly debated by researchers, and I am hoping that by studying the methodology behind individual-based models, I can take a step towards resolving this debate.

My PhD project involves the construction of equivalent Eulerian and Lagrangian phytoplankton ecosystem models. The first part of the project involved testing all of the decisions surrounding the Lagrangian model and how these decisions affected the model predictions (e.g. particle movement rules, boundary conditions, number of agents). Once these models were deemed to be suitable for the testing site (Ocean Weather Station India), a series of experiments based on the biology could be carried out.

The so-called spring bloom - the rapid increase in phytoplankton production observed in temperate regions early on in the year - is of great importance to the global carbon budget. Although it has been intensively studied, there still exists controversy as to the controls on its timing and magnitude. It has long been believed that the major control over its timing is provided by the depth of the upper mixed layer, with the bloom occurring when the mixed layer shallows enough to allow the phytoplankton sufficient sunlight so that the growth rate exceeds total losses (grazing, mortality, respiration). A Lagrangian phytoplankton model allows for these hypothesis to be more closely investigated and also for other hypotheses, such as the critical turbulence hypothesis (the spring bloom can also be triggered when the turbulent diffusivity falls below a critical value), to be explored.

My undergraduate degree was in Oceanography and Computing at Bangor University, Wales.