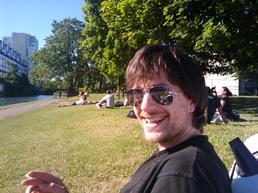 Prior to joining the Center for Doctoral Training in Complex Systems Simulation in 2012, my educational background lay in the physical sciences (BSc Theoretical Physics, MSc Quantum Fields and Fundamental Forces). On joining the CDT, my interests diversified into a number of inter-related areas including evolutionary biology, artifical life, the origins of life and the major transitions in evolution.

My current research interests are focused on

The ultimate objective of my current work is to construct idealised and classifiable models within an artificial physical chemistry that demonstrate the decoupling of storage and processing apparatus by accumulation of adaptation. Such decoupling is widely seen as necessary for open-ended evolution, both due to the emergence of epigenetic inheritance due to the increased coupling to the environment and because this type of increased coupling might allow adaptation to favour division of labour and cooperation. For these reasons, the study of physical chemistries is a research area is not only of interest in itself, but might shed light on the major transitions in evolution at other levels of the biological hierarchy.

This work is funded by the EPSRC 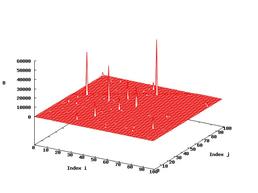 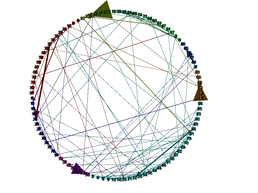 Reaction network partitioned by community structure algorithm. Mutations in micelles are demonstrated to occur between these quasi-compartments in the underlying network.