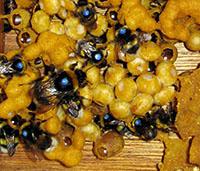 Ecology is the study of organisms, populations and their interactions with each other and the environment. This topic includes projects on biogeography, ecosystems (the combined physical and biological components of an environment), animal behaviour and food webs.

As part of a wider project developing a conservation strategy for the marine environment of the Galapagos Islands, this research used multi-variate modelling techniques to develop a habitat suitability prediction model for coral reefs.

This work aims to contribute to our understanding of the relationship between complexity and stability. By describing an abstract coupled life-environment model, we are able to employ novel analytical, and computational techniques to shed light on the properties of such a system.

A single species spatially-explicit agent-based model has been developed that illustrates the role of simulation modelling, integrated with an adapted least-cost modelling approach and real-world geographical data, in exploring jaguar population dynamics.

We present an agent-based model of jaguars (Panthera onca),
scaled for fragmented habitat in Belize where proposals already exist for creating a jaguar corridor. We use a least cost approach to simulate movement paths through alternative possible landscapes.

Ecosystems may exhibit collective adaptive properties that arise from natural selection operating on their component species. These properties include the ability of the ecosystem to return to specific configurations of species, in a manner highly analogous to mechanisms of associative learning in neural networks.

Do the adaptive dynamics of host-parasite systems catalyse or constrain sympatric speciation?

Coevolutionary dynamics affect both parties evolutionary trajectories. When might these affect speciation? This project uses a simulation model to explore the issue.

Monitoring vegetation phenology at multiple scales in Europe from the GMES satellite sensor time-series: a special consideration to natura2000 areas

We are mining EST libraries (sequence fragments of expressed genes) for novel proteins that might play a role in the immune response of crustaceans.

How do organism's activities affect their evolutionary trajectories? This project uses simulation techniques to evaluate the effects of this feedback.

This study presents a novel analysis of an agent-based model of hedgehog movements integrated with a least-cost model of hedgehog dispersal and validated in landscapes with a varying degree of habitat fragmentation. A comparison of the fitness of individual agents reveals that incorporating a simple rule into
individual agents, to better mimic movement choices by real hedgehogs, dramatically affects the relationship between individual fitness and fragmentation.

Is the decline in East African lesser flamingo population a natural concequence of soda ake dynamics?

An interdisciplinary approach using palaeoenvironmental data analysis and a modelling is being used investigate the dramatic fluctuations in conditions in the East African Rift Valley soda lakes, and how these changes may be impacting the lesser flamingo population.

Focus in the marine ecosystem modelling community is starting to shift towards the use of Lagrangian, agent-based models as these are believed to produce more realistic results. The basic assumptions behind these models have not been thoroughly tested, and this project aims to undertake a detailed study of Lagrangian marine ecosystem models, before creating one to investigate the dynamics at the Bermuda Atlantic Time-series Study station (BATS).

Drought is expected to increase in prevalence by 2050. Similarly, the use of biochar (a charcoal based soil amendment) has been suggested as a method to sequester carbon and fertilize soils without need of mineral fertilizers, and its use is increasing. We are using next generation DNA sequencing technology and bioinformatics to determine bacterial genetic diversity from soil samples which have been subject to drought or biochar amendment, to further our understanding of the impacts of environmental change on microbial communities.

This study involves adapting a previously-published model to take into account the effect resuspension events (both natural and anthropogenic) may have on nutrient dynamics at the sediment-water interface, and hence produce better estimates for the total nutrient budgets for shelf seas.

This research review project explores current state of avian flock modelling research, exploring how ideas have developed since the earliest theories dating back to the 1930s.

To what extent are the alarm calls of putty-nosed monkeys likely to be a good model for human language evolution? Simulation is used to classify evolutionary trajectories as either plausible or implausible, and to put lower bounds on the cognitive complexity required to perform particular behaviours.

Individual-based (Lagrangian) models lend themselves to the study of the controls of the spring bloom in the ocean, due to their ability to represent both the turbulence and the phytoplankton motion. Here, we use a Lagrangian phytoplankton model to test some of the most prevalent hypotheses (e.g. critical depth and critical turbulence).

Using and integrating least-cost models and agent-based simulations to explore the way in which mammals interact with, and hence move, through fragmented landscapes.

Models which explore the possibilities of emergent self-regulation in the Earth system often assume the timescales associated with changes in various sub-systems to be predetermined. We analyse a classic model of environmental self-regulation, Daisyworld, and interpret the original equations for model temperature, changes in insolation, and self-organisation of the biota as an important separation of timescales.

The Carpenter model is a useful and simple model to predict the eutrophication of shallow lakes via phosphorus input. This project aimed at resolving the function of the biota, which play a major role in the phosphorus dynamics, but are so far only implicitly modelled, and extending the model to explicitly represent them.

System-level homeostasis has been demonstrated in a number of conceptual, artificial life, models which share the advantage of a thorough and transparent analysis. We reintroduce a general model for a coupled life-environment model, concentrating on a minimal set of assumptions, and explore the consequences of interaction between simple life elements and their shared, multidimensional environment.

We develop a model that estimates the water saturation level within the soil at different depths, and the uptake of water by the root system. Data from Smethurst et al (2012) is used to validate our model and obtain a fully calibrated system for plant water uptake. When compared quantitatively to other models such as CROPWAT, our model achieves a better fit to the experimental data because of the simpler, first, second and third order terms present in the boundary condition, as opposed to complicated non-linear functions.

David Bell
None, None