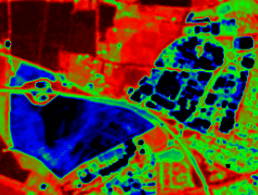 This topic consists of research on analysing and processing data from Earth Observation systems, typically satellite and airborne imagery platforms. One particular area of focus is atmospheric correction techniques, which aim to remove the effect of the atmosphere on satellite and airborne imagery. Analysis of the efficacy of these correction techniques can involve significant computer modelling, data assimilation and statistical visualisation.

Much other research within Earth Observation/Remote Sensing involves significant computer modelling, often including the processing of extremely large datasets.

Developing methods to monitor the clarity of the atmosphere from satellites at 100,000 times the resolution of previous methods. This can then be used to monitor air pollution, correct satellite images and provide data for climate studies. Simulation is used to model the effects of atmospheric pollution on light passing through the atmosphere, and to test the method under 'synthetic atmospheres'.

Ground calibration targets (GCTs) play a vital role in atmospheric correction of satellite sensor data in the optical region, but selecting suitable targets is a subjective and time- consuming task. This project is developing methods to automatically select suitable GCTs, using a combination of remotely sensed multispectral and topographic data.

Monitoring vegetation phenology at multiple scales in Europe from the GMES satellite sensor time-series: a special consideration to natura2000 areas

Spatial variability of the atmosphere in southern England

No-one really knows how variable key atmospheric parameters such as Aerosol Optical Thickness and Water Vapour content are over relatively small areas. This study aims to find out!

Areas of sand dunes (known as dunefields) develop complex patterns over time. These are influenced by both the past and present environmental conditions, including surface moisture, vegetation distribution and human impact. This project develops a method of automated pattern analysis which allow the patterns produced by a large number of sand dune evolution simulations (performed using the DECAL model) to be quantified over time.

The Origin of Aeolian Dunes (TOAD)

The overall aim of this project is to understand the genesis and subsequent evolution of aeolian early stage bedforms by quantifying for the very first time the role and importance of flow, transport and surface feedbacks in the initiation and emergence of dunes. This project offers the genuine prospect of surmounting arguably the major enduring research question within aeolian geomorphology, leading to broader insights which will offer knowledge benefits for sedimentary landform studies as a whole.

Measurements from GPS base stations can be processed to provide estimates of the water vapour content in the atmosphere. These are lots of these base stations across the world and they take measurements very frequently, making them perfect data sources for scientific use. However, we need to understand their accuracy - and this project aims to do this.

Iris Kramer
None, None