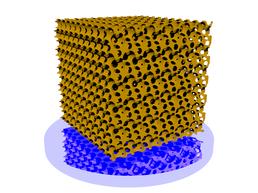 Photonics is the science concerned with the study of light. It encompasses all of the generation, emission, transmission, detection, control and processing of light. This topic includes a broad range of photonics research, which involves both numerical modelling and the fabrication and testing of photonic devices.

All-optical phase regeneration uses a process known as four-wave mixing in a nonlinear optical fiber to carefully mix light with a communication signal in such a way that it cancels transmission noise in the the signals phase, increasing the distance over which the signal can be transmitted. New regenerator designs are presented that suppress phase to amplitude noise conversion and performance is simulated using a supercomputer to assist experimental investigation.

Optical resonators enhance the interaction of light with matter while simultaneously acting as a temporal buffer. Both effects can be exploited to generate light-induced friction, or cooling, forces on atoms, molecules, or micromirrors. We investigate various aspects of these effects through numerical simulations, assisted by approximate analytical models, in this EPSRC and ESF sponsored project.

The £10million Centre for Doctoral Training was launched in November 2013 and is jointly funded by EPSRC, the University of Southampton, and its partners.

The NGCM brings together world-class simulation modelling research activities from across the University of Southampton and hosts a 4-year doctoral training programme that is the first of its kind in the UK.

Nano-structured materials can provide very specific and often very special optical effects which can be exploited for a large range of optical applications including wavelength filters, LEDs, micro-lasers, HDTV, solar-cell coatings, optical high-Q fibres, diffraction gratings, polarisation devices, optical switches, etc. This research in “Computational Electromagnetic Modelling of 3D Photonic Structures” aims to address the need for accurate and fast three-dimensional modelling, simulation and analysis processes in the photonics industry. A FEM/FDTD software suite will be developed to simulate Maxwell’s field equations and thin-film quantum effects (plasmons) in the visible and near-infrared EM frequency spectrum. The results obtained from running the software on suitable compute clusters will then be compared to the analysis results of experimentally manufactured materials. We will investigate structures occurring in nature such as iridescent butterfly wings, white/black reflecting beetle shells, etc., and aim to optimise artificially designed structures with periodic, quasi-periodic and random configurations.

The project aims to design, fabricate and test a novel integrated all-optical buffer device that is based on MEMS technology and provides a continuously tunable delay for optical pulses over a broad wavelength region. Such a device could play a crucial role in future packet-switched optical networks, photonic integrated circuits and coherent light based applications such as optically steered phase array antennas, LIDAR and optical coherence tomography.

This EPSRC funded project is a collaboration between the Optoelectronics Research Centre, Southampton, and University College London.

This PhD project is about using digital electronics to implement a parametric feedback loop to modulate the intensity of an optical trapping laser in order to stabilise/cool the centre of mass motion of a nanoparticle. It is then intended we use digital parametric feedback to drive the motion of the particle, which is essentially a quantum harmonic oscillator, into non-classical quantum states such as squeezed and number states.

We have developed an efficient algorithm to determine the liquid crystal alignment in the absence of defects. The aim of this project is to extend this algorithm to include defects.

The spectroscopic ruler is a technique to measure the geometry of biomolecules on the nm scale by labeling them with pairs of fluorescent markers and measuring distance dependent non-radiative energy transfer between them. The remaining uncertainty in the application of the technique originates from the unknown orientation between the optical dipole moments of the fluorescent markers, especially when the molecule undergoes thermal fluctuations in physiological conditions. Recently we introduced a simulation based method for the interpretation of the fluorescence decay dynamics of the markers that allows us to retrieve both the average orientation and the extent of directional fluctuations of the involved dipole moments.

The work is concerned with the propagation of high-power short-pulse propagation in microstructured fibres or waveguides. Dispersion properties and optical nonlinearities are exploited for pulse shaping techniques in space, time, and frequency. Investigated microstructures include silica or soft-glass templates, gas-filled capillaries, and semiconductor-filled fibres, and optical wavelengths range from the X-ray to the mid-infrared regime.

Soft x-ray science on a tabletop

Complex numerical simulations are being performed to aid experimentalists at Southampton realize the next generation of high brightness tabletop sources of coherent soft x-rays.?

Radio Over Fibre (ROF) is a communication technique that aims to gainfully amalgamate the benefits of optical and wireless communication, while keeping the system cost low. This technique would support the next generation of wireless services.

Zheng Jiang
None, None

Varghese Thomas
None, None