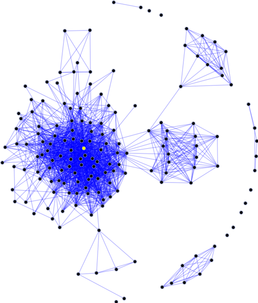 People are linked by relationships - friendships, animosities, commercial agreements, social contracts, partnerships, familial ties, shared interests, etc. Social scientists of many kinds are interested in understanding the nature of these relationships, how they form, change, dissolve and influence social activity. The importance of these questions is increasing in a world where social behaviour is mediated by an increasing number of technologies and has an impact on an increasing number of

By treating a set of people and the relationships between them as a social network, we are able to approach these research questions using mathematics and simulation modelling in addition to empirical and analytic tools more typical of the social sciences. Combining these methods allows us to explore not only the structure and make-up of the social networks around us, but to understand how those networks arise and evolve over time.

Using citation network analysis this project aims to investigate the effects that the Cold War had on researchers on both sides of the Iron Curtain.

This interdisciplinary research collaboration arose within the Simple Models of Complex Networks research cluster funded by the EPSRC www.epsrca.ac.uk through the Novel Computation Initiative. Here, leading groups from the Universities of Leeds, Sheffield, Nottingham, Southampton, Royal Holloway and King’s College and industrial partners BT are brought together for the first time to develop novel amorphous computation methods based on the theory of random graphs.

An Evolutionary Economic Approach to the Household?

The household is a fundamental societal unit. In a huge array of contexts, our understanding of social behaviour relies on an interpretation of how decision are taken at the household level.This work aims to model individual decision-making and interactions between individuals explicitly within the framework of agent-based modelling, following the work of Potts (2000). Potts describes how economic problems can better be dealt with by considering how agents with incomplete, evolving preferences in the form of decision rules interact on a network, and how they cooperate and form ties to produce combinatorial technologies. Following the work of Gary Becker, he then considers how this ostensibly economic framework might hypothetically describe partnership search and household formation and dissolution.

This work aims to better understand and model the role of individual learning and experience on driver route choice. We intend to demonstrate that vehicle-driver agent based models stand alone in being able to capture the complex reciprocal interactions between drivers and their environment, and allow us to incorporate the effects of prior knowledge from previous trips and advice from official information sources and social networks.

This is a cutting-edge project in demographic methodology, funded by the European Research Council (ERC), through the Consolidator Grant ERC-CoG-2016-725232. Its aim is to develop a ground-breaking simulation model of international migration, based on a population of intelligent, cognitive agents, their social networks and institutions, all interacting with one another. The project also aims to transform the study of migration – one of the most uncertain population processes and a top-priority policy area – by offering a step change in the way it can be understood, predicted, and managed.

This research programme brings together teams of researchers from social sciences, management science and complexity science to develop a suite of models representing the socio-economic and demographic processes and organisations implicated in the UK’s health and social care provision. Integral to the project is working with our partners in the public sector and communicating the results of these models to policymakers allowing them to effectively plan for the future.

Reforging the Wedding Ring: Exploring a Semi-Artificial Model of Population for the United Kingdom with Gaussian process emulators

Note: Jakub Bijak from Social Science is the lead author on this project, which is forthcoming in Demographic Research (http://www.demographic-research.org/)
Co-Authors: Eric Silverman, Viet Dung Cao

We extend the „Wedding Ring? agent-based model of marriage formation to include some empirical information on the natural population change for the United Kingdom together with behavioural explanations that drive the observed nuptiality trends.

The recent economic crisis has highlighted a continued vulnerability and lack of understanding in the financial markets. In order to overcome this, many believe that current market models must be improved. Recently, a trend towards agent-based modelling has emerged. Viewing the economy as a complex system is beginning to be seen as key to explaining certain market characteristics that were originally considered anomalies.

One of the fundamental assumptions in economics is that of information efficiency: that the price of a stock reflects its worth, that all possible information about a security is publicly known, and that any changes to price take place instantaneously. In reality, however, this is not the case.

This project considers the use of agents in modelling economic systems and demonstrates the effect of information levels on price discovery using a simple market simulation.