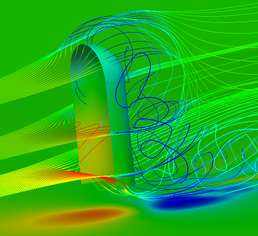 Flow development on a spinnaker-type device, composed by a cylindric body and a spheric head. The analysis is performed with OpenFOAM

Yacht sails are a complex fluid structure interactions system. The current research focuses on downwind sails in particular, such as Spinnakers and Gennakers. From a fluid dynamic perspective, sail flow is turbulent with large separated regions. Turbulence arise because of the sail size and relevant speeds; separation occurs mainly due to the large angles of attack and the high cambered profile of the sail.
From a structural perspective, a sail is build by a very thin fabric reinforced on the corners. Due to the very limited thickness, the fabric deformation is affected by a buckling related phenomenod, called wrinkling. This determines the formation of wrinkles and out of plane oscillations on the fabric surface, when this is subjected to a load. Unsteadiness is introduced mainly by the nature of the wind and the boat's motions.

In the current research the fluid is analysed with OpenFOAM. The unsteady pisoFOAM solver is used when performing isolated fluid calculations, whereas a modified version of the PimpleDyMFOAM solver has been compiled for imposing patch deformations in an Arbitrary Lagrangian Eulerian framework. This is a technique, which allows to couple the fluid and the structure in conservative form. The structural analysis is performed with shell MITC non-linear elements, implemented in the code Shelddon. MITC elements have the capability to treat very thin structures, and shells consider all deformation components. Phenomena such wrinkling are then naturally taken into account and reproduced.