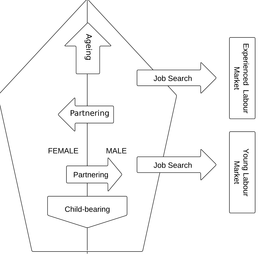 This project is an attempt to formalise the Easterlin hypothesis in a simulation model and test its plausibility.
The Easterlin Hypothesis, developed by economist Richard Easterlin, purports to describe a mechanism whereby the fertility decisions of a particular cohort of individuals are linked to population level conditions that held sway when they were born The empirical support for the theory is quite strong for the certain periods in the history of the United States, but elsewhere it is circumstantial and patchy. A simulation model may allows us to test under what conditions it may hold and not hold, and also might help inform more general theory building.