Numerical investigation of the true sources of jet noise 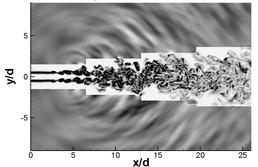 People living close to airports have become very sensitive to noise pollution, which affects their health and quality of life. Unfortunately, air traffic is predicted to increase significantly in the next decade. Noise pollution is likely to follow the same trend unless aircrafts become quieter. As a result, regulations have been reinforced and aircraft manufacturers are now required to decrease aircraft noise below stringent levels.

One of the main source of aircraft noise is jet noise. Jet noise is generated by the high speed flow at the exit of turbofan engines. In 1950, sir James Lighthill wrote a paper in which he showed that jet noise increases dramatically with jet velocity. This crucial result led to the design of wider engines, which generate slower flows, thereby greatly reducing jet noise. Unfortunately, it has now become impossible to further increase the width of the engines due to the limited space available below the wings of the aircraft. Aircraft manufacturers have to find innovative ways to control jet noise.

To achieve our objective, we will simulate a jet numerically. We will then identify the silent part of the jet by using signal processing techniques.

This project will allow aircraft manufacturers to access the sources of jet noise. It will help them to better understand the physical mechanisms of sound generation. Such understanding is crucial for them to further reduce jet noise. Funding

This project is funded by the Engineering and Physical Sciences Research Council (EPSRC), with additional support from Rolls-Royce plc. Rolls-Royce is currently funding a University Technology Centre (UTC) on aeroacoustic noise at the Institute of Sound and Vibration Research (ISVR).