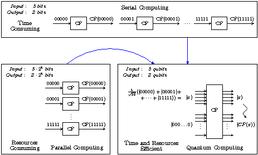 Illustration of Quantum Parallelism. Simultaneous evaluations of a CF for all the possible inputs with the computational cost of one CF evaluation as in parallel computing and same allocated resources as in serial computing.

Modern communication systems support the exchange of information between transceivers with multiple antennas, resulting in a Multiple-Input Multiple-Output (MIMO) communication system. Let us consider a scenario with K antennas at the transmitter and L antennas at the receiver. Each of the K antennas transmit their own signal to all of the receiver's L antennas during each timeslot. Assuming that all the K signals arrive almost simultaneously at each of the L antennas, it is a challenging task is to separate and determine which signal was sent by each of the K antennas, a process termed as signal detection. This is accomplished by the minimization of a cost function (CF). Each evaluation of the CF increases the complexity of detection. Hence, the number of CF evaluations has to be kept at a minimum. In the simplest possible scenario, there are 2^K possible multi-level signals that might have been received by each of the L antennas. The optimal classic method includes evaluating the CF 2^K times for each of the L antennas, comparing them to each other, and then deciding which multi-level signal is the most likely to have been transmitted. When K and L are large, a vast number of L * 2^K CF evaluations are required by the optimal classic method.

Quantum computation uses the quantum equivalent of a bit, termed as a quantum bit or qubit. Unlike bits, which may only take the values 0 or 1, qubits may also be in a superposition of those values, e.g. 50% 0 and 50% 1, in exactly the same way as a coin is 50% Heads and 50% Tails, while it is spinning. By combining many superimposed qubits, it is possible to create all the possible 2^K multi-level signals. Quantum parallelism uses the superposition of all the possible transmitted multi-level signals and evaluates the CF for all of them at the cost of only one CF evaluation. Quantum parallelism is one of the main attributes of quantum computation that makes it attractive in the wireless communications research area.

Quantum computation assumes the existence of quantum computers. Since this is not the case in the early 2000s, the complexity of simulating the performance of the quantum algorithms is even higher than that of the optimal classic equivalents. Until the era of quantum computers arrived, the use of parallel super-computers such as Iridis assists us in facilitating their simulation.