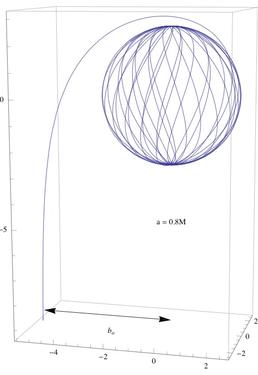 Geodesics around a rotating black hole

A typical spiral galaxy contains both (i) a population of stellar-mass compact objects (e.g. black holes or neutron stars), and (ii) a supermassive black hole at its core. If a compact object is deflected into a gravitationally-bound orbit of the central hole, it will shed orbital energy and angular omentum through gravitational radiation, and spiral inwards. Detection of gravitational waves from extreme mass ratio inspirals (EMRIs) is a key goal of the proposed LISA mission.

The frequency of the gravitational-wave signal is set by the orbital frequency, which increases as the inspiral progresses. In the final year before merger, when the signal is strongest, an EMRI may undergo ~10^5 orbits. A pressing challenge is to accurately model the phase evolution of an EMRI orbit over many thousands of cycles.

Three complementary approaches are under development: (i) numerical relativity methods, (ii) post-Newtonian expansions, and (iii) self-force calculations. Numerical relativity can now model comparable-mass inspirals and mergers, but struggles in the extreme mass ratio regime. Post-Newtonian expansions work for EMRIs but lose accuracy in the final stages of inspiral. By contrast, self-force methods are well-suited to the extreme-mass ratio, near-horizon regime.

Self-force methods are somewhat related to radiation reaction calculations in electromagnetism. A compact body follows a geodesic of the (unknown) overall spacetime. Reinterpreting, the body is "deflected" from motion along a geodesic in the (known) background spacetime by a "self-force". In some sense, the small orbiting black hole interacts with its own field, and thus experiences a back reaction which causes the inspiral. It turns out that to find the instantaneous self-force one must compute a "tail" term: an integral over the entire past history of the system.

The aim of this project is to compute the self-force on the Kerr spacetime, using the "m-mode regularization method" (see Barack & Golbourn, Phys. Rev. D 2007). First we remove the singular part using an appropriate "puncture" function. Next we decompose into azimuthal modes. Then we evolve each mode in 2+1 dimensions, using finite difference methods. This requires long, high-resolution runs on IRIDIS. Finally we reconstruct the self-force. In the long-term, the results will inform data analysis strategies for the LISA mission.