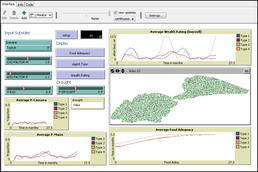 Food security remains a deep seated issue throughout Sub-Saharan Africa. Within Malawi, the vast majority of the rural population are engaged in subsistence farming. Continued reliance upon rain-fed agriculture renders smallholders vulnerable to climatic shocks, whilst high population densities, small plot size and poor soil quality further compound food insecurity. Behavioural decisions and coping strategies of farmers in the face of drought formed the focus of this project. A participatory rural appraisal (PRA) exercise was designed to elicit greater understanding of smallholder responses to drought; as well as the perceived impact of government interventions in the form of input subsidies. A key objective of the project was to determine whether PRA exercises can be utilised in the construction of empirical agent-based models (ABM). Field data was successfully employed to inform the behavioural rules of agents. However, limited data availability was identified as a key issue undermining model integrity. Initial implementation of the model found inferences could be made concerning the impact of policy upon household decision making and food security. Overall the project provides fertile ground for future work. It is hoped that by integrating PRA exercises and ABM it will be possible to create a collaborative framework which promotes interaction between scientists, policy makers and stakeholders, alike.