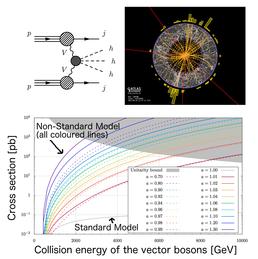 Essentials or Why do we need new Physics?

In the world of particle physics, there is one particular model which made it all the way to the top. This model, named "The Standard Model of Particle Physics", or just "Standard Model" (SM), is currently the best model we have to describe what lives at scales even smaller than atoms: the elementary particles. Though it describes a huge number of phenomena correctly, the Standard Model is not perfect. There are still various unsolved mysteries and open questions which it cannot solve or answer. For example, the Standard Model does not describe gravity at all and there is no hint for something called "Dark Matter" and "Dark Energy". These account for 95% of everything in the universe, whereas all matter and antimatter, whether it is the smallest molecule or the biggest galaxy, only accounts for vanishingly low 5%. Also, the true nature of the Higgs boson is still unknown, since it was not possible yet to measure its properties precisely enough. Until today, physicists try to solve these problems by imposing new theories with new elementary particles and sometimes even more dimensions than just three. In general, these theories are called "Beyond the Standard Model" (BSM) theories.

This project was created in order to give prospects for such BSM theories by investigating the properties of the Higgs boson at the CERN LHC and future high energy colliders, especially in processes producing three Higgs bosons. A particular focus is set on the yet hypothetical high energy collider VLHC (Very Large Hadron Collider) with a diameter of stunning 100 km and ten times more energy compared to the current CERN LHC, which will massively improve the possibility to validate aspects of BSM theories. The technical part of this study comprises evaluating highly complex multidimensional integrals arising from thousands of Feynman diagrams with up to five particles in the final state, including triple Higgs boson production. Triple Higgs boson production is very sensitive to the properties of the Higgs boson and therefore a good way to check for new Physics. Also part of the project is the complicated simulation of a particle detector such as the ATLAS detector at the CERN LHC including a vast number of particle scatterings and recombinations.

The role of Iridis in this project is absolutely vital for this study. Where it sometimes is possible to solve integrals from Feynman diagrams with only two particles in the final state by hand or on a single computer in a reasonable time, there is no chance to do so with five final state particles. For this reason, I used the computation packages MadGraph and CalcHEP on Iridis to solve these integrals using parallelisation techniques. While these computations usually last for several hours or days on Iridis, it would have taken several weeks to months on Iridis without parallelisation and several months or years to produce the same results on my computer at home. Without the use of High Performance Computing combined with parallelisation techniques, this study therefore would not have been realisable.

The results I gathered using Iridis showed a large enhancement in cross section for Triple Higgs boson production, if the Higgs coupling to other bosons differs only very slightly from the Standard Model coupling. This enabled me to give prospects for how and when different BSM theories might be detectable at future high energy colliders. As an exciting gateway into future Physics, these results might act as a motivation to actually fund and build these machines. In any case, no matter whether they will be build or not, Iridis will always be inevitable for my research.