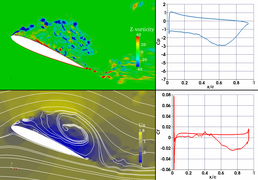 Large-eddy simulation on an oscillating airfoil NACA 0012, Re=135,000, k_red=0.1 and alpha =10 + 15 sin(wt) (optimized on Firefox browser) Mesh is generated in Pointwise.V16 http://www.youtube.com/watch?v=yWluKBalRLQ&feature=related

Large wind turbines are being installed throughout UK and often in regions with complex meteorology and/or topography (e.g. involving wind gusts, turbulence, icing), which affect turbine performance (energy output, noise emission etc), life expectancy and safety. For example, a sudden change of wind direction puts the wind turbine under a yawed condition before the yaw drive adjusts the rotor to face into the wind again. Under yawed conditions, pseudo-sinusoidal inflow angle oscillations can elicit dynamic stall, which significantly intensifies aerodynamic load production. These oscillations may also significantly amplify the vortex shedding, which can affect downwind turbines. It is very expensive to conduct experiments to study such problems. Although the Computational Fluid Dynamics (CFD) approach is a cheaper alternative, it still faces many challenges. Direct Numerical Simulation and Large-Eddy Simulation (DNS & LES) are only capable of accurately simulating low-Re flows for such applications. On the other hand Unsteady Reynolds Averaged Navier-Stokes (URANS) approaches are less than adequate for the prediction of transition from laminar to turbulent flow, flows in which the time scale of the external driving mechanism is of the same order as the turbulence time scale, etc. This proposal suggests, firstly, an LES study of low-Re flows around an oscillating airfoil, to investigate the transition, separation, vortex shedding and dynamic stall behaviour. The computations will be validated against available data in the literature. Secondly, a combined LES-RANS approach (with, e.g., a transitional RANS model in the near wall region) will be carefully designed (using our recently developed efficient turbulence generator at the interface between LES and RANS) and validated against low-Re results. The combined LES-RANS approach will then, finally, be used for flows over full scale wind turbine airfoils and three-dimensional blades in abnormal environments, and to provide a prospect for aerodynamic control.