Nonlinear and Complex Dynamics of Pendulums for Energy Extraction 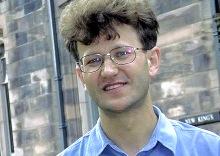 FSI Seminar 11:00 Feb21 B28/2001 on Nonlinear and Complex Dynamics of Pendulums for Energy Extraction

Professor Marian Wiercigroch, Fellow of the Royal Society of Edinburgh, Sixth Century Chair in Applied Dynamics, Director of the Centre for Applied Dynamics Research in the School of Engineering, University of Aberdeen will visit our faculty.

Tea, coffee and biscuits will be available.

Complex dynamics of pendula systems is being analysed with a view of vibrational energy harvesting and vibration isolation. The main focus of the paper is a new concept of energy conversion [1], where a predominantly vertical oscillatory motion is being converted into rotations by means of a pendulum or pendulums system. The simplest physical configuration of this idea is a parametric pendulum operating in the fully rotational motion. Practically this can be envisaged as a floating structure excited to which pendulums are mounted at their pivots. These vertical oscillations of the structure will generate the pendulums rotational motion.

Numerical, analytical and experimental studies have been undertaken on a parametric pendulum [2-4] and a pendulum excited by a planar motion [5]. They suggest the rotational motion is persisting and occurs for a large range of frequencies and excitation amplitudes, which are the main control parameters. These investigations reinforce the viability of this new concept of the energy conversion. In the lecture I outline this new concept and review the current theoretical and experimental developments. Specifically, I will present the physical and mathematical modelling of a single pendulum and a system comprised of two pendulums excited by a planar motion. Details of the experimental rig for this new two pendulums system and a correlation between the theory and experiments will be given. Detailed numerical and analytical results showing strongly nonlinear behavior will be discussed.

Professor Wiercigroch, educated in Poland, UK and US, holds a prestigious Sixth Century Chair at the University of Aberdeen. He is also a Director of Internationalisation at the College of Physical Sciences.

His main area of research is nonlinear dynamics, which he applies to various engineering problems including downhole drilling, rotor systems, underwater acoustics, fatigue and renewable energy.

He is a founding director of the internationally renowned Centre for Applied Dynamics Research. His publications include 120 journal papers, 150 conference contributions, 14 edited volumes and 2 monographs. He is a member of 8 editorial boards of peer review journals and a frequent keynote speaker at major international conferences. He has received many awards and distinctions including a Senior Fulbright Scholarship and a Fellowship of the Royal Society of Edinburgh.

Faculty of Engineering and the Environment