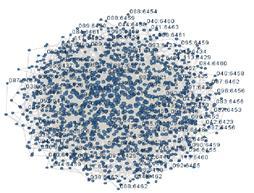 A GaianDB cloud containing many nodes

Abstract GaianDB is a small (four-megabyte) dynamic distributed federated database (DDFD). This is the ultimate Data virtualization engine for accessing data up to the edge of the network or for DB scaling in the Cloud. GaianDB federates heterogeneous back-end data sources (RDBMS databases, files, text indexes, and so on) using a logical table abstraction layer. Its principal feature is its ability to autonomically discover and federate other GaianDBs, federating nodes such that a whole network of nodes can be formed, making it ideally suited for the Cloud. Its connectivity model is "biologically inspired" in that it strives to minimize network diameter and maximize connections to the most fit nodes. GaianDB advocates a flexible "store locally, query anywhere" paradigm allowing for elascticity. GaianDB also provides a wide variety of other features and has already been used in complex, distributed, semantic join queries for text analytics applications and has drawn the attention of significant customers in the military.

GaianDB's self-organizing implementation makes it easy to manage and to cope with failures or network topology changes, and it is easy to deploy GaianDB on thousands of devices and computers with no central management or in a Cloud. An automatic query propagation mechanism allows an application to get to the specific data anywhere in the network just as if it were a local database.

Biographies Patrick Dantressangle is a Master inventor and senior technical staff member working for IBM Software Group and Emerging Technology Services, focused on research and development of innovative information management products and technologies. He has worked on many RDBMs technologies since 1990 and for IBM since 1996. Mr. Dantressangle is currently working on what's next in the RDBMs space, involved with big data and large database projects, as well as participating actively in the International Technology Alliance (ITA) research project. The ideas underpinning GaianDB were initially developed as part of this research project.

Graham Bent, Ph.D., is a senior technical staff member at IBM Emerging Technology Services. He works on a wide variety of customer engagements, specializing in data- and text-mining applications. Dr. Bent is currently a technical lead on the International Technology Alliance (ITA) project. The ideas underpinning GaianDB were initially developed as part of this research project.

David Vyvyan is an IT specialist in IBM Software Group. He has worked at IBM Emerging Technology Services for the past four years on various data/grid and WebSphere® projects, using a wide variety of languages and leading edge technologies. Before that, he worked for three years in Voice Systems as a C/Java developer on WebSphere Voice Response for AIX®.