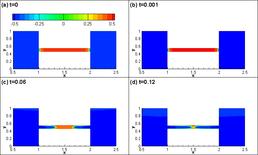 The diffusion between two miscible fluids in a single capillary tube (Gr=1, d=0.1)

The dissolution in the miscible liquid/liquid mixture plays key role in various applications such as enhanced oil recovery, CO2 sequestration, aquifer remediation and solvent extraction. Ultimately, the mixing of two liquids occurs through the interfacial diffusion, and it can also include externally or internally driven hydrodynamic flows. The understanding of the dynamics of the diffusion at high solute/solvent concentration levels still remains poor.

Traditionally, the diffusive process is explained by Fick's law. In a recent experimental study, the dissolution dynamics of several solute/solvent mixtures that fill single capillaries and network of capillaries was investigated. The obtained results clearly show non-Fickian time dependencies even when all hydrodynamic flows were excluded. We undertake the theoretical work with the aim to reproduce the obtained experimental results. We firstly want to develop a comprehensive theory capable of predicting the hydrodynamics of miscible multiphase systems within a capillary tube or a porous medium. The necessity to resolve and trace the miscible solute/solvent interface makes the numerical simulations very demanding. We use the Iridis Cluster to make such computations possible.

Further, we plan to investigate the effect of mechanical vibrations on the dissolution process.