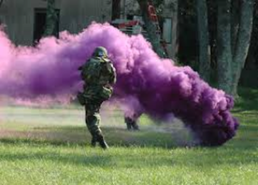 Using a Smoke screen to Protect Advancing Friendly Forces: Knowing where the Smoke will go and how dense it will be helps!

Existing models produce predictions of the dispersion of scalar pollutants and toxic agents using a variety of Gaussian Plume Model formulations, and use these to estimate source origin, and suggest sensor placement. These models are applied to outdoor and also urban environments and to understand how small airborne particulates are transported and dispersed. There is a need to update the near field accuracy and/or the level of model used for these predictions and the basic project plan is to analyse relatively small scale volumes, of order 1km using Large Eddy simulation (LES) to supply the flow fluctuation information. This aspect of the project is covered by other work at Southampton. The research interest for this project is to model the dispersion of the small particles within the Large Eddy Simulation, given that the unresolved scales, modelled by the LES are typically the scales that disperse the particles locally. The problem is compounded by the highly anisotropic turbulence in the near ground region, which, unfortunately, is often of highest relevance. The project will compute a series of low speed flows using DNS, and then post process (filter) the DNS data to obtain filtered (large eddy) flow fields for a range of filter widths. Particles will then be dispersed in the DNS and also in the LES flow fields of increasing filter width to first understand the connection between the dispersion prediction error and the filter width. The final objective of the project will be to suggest appropriate dispersion coefficients to enable an Eulerian framework for the particle phase to be computed as part of the LES computation, obviating the need to compute particle trajectories in the Lagrangian sense.