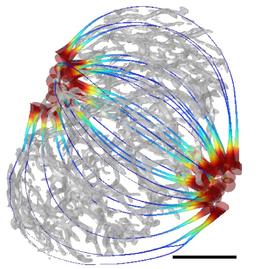 The lymphatic system performs three main roles: returning interstitial fluid back into the blood stream to maintain tissue fluid homeostasis, to transport fat from the intestines and to act as a defence against foreign materials. Lymph nodes act as filters for the system, filtering the lymphatic fluid, as well as being a site for transfer of immune cells to and from the circulatory system and regulate lymph protein content.

The aim of this project is to increase our understanding of how the lymph flows through the system by creating three dimensional fluid structure interaction models of the secondary lymphatic valves and image based models of lymph nodes. It is difficult to physically study the lymphatic vessels and nodes due to their size and fragility.

The lymphatic valve and surrounding wall is modelled using an idealised geometry in COMSOL Multiphysics, a commercial finite element analysis software. A material model has been found for the highly non-linear stress-strain behaviour of the wall. This is being applied to 2D and 3D models to investigate valve closure behaviour.

Image based models of murine lymph nodes are being created in COMSOL Multiphysics. The images were taken using selective plane illumination microscopy and synchrotron micro computed tomography. The images are used to define the geometry and to define the permeability of the lymph node tissue to the flow of lymph. This is done by relating the grey scale values in the images to the permeability value with a linear relation. It is assumed that the lighter the grey scale, the more dense and so the less permeability the material is. The model has shown that the fluid flow pathways are affected by the internal structure of the node.