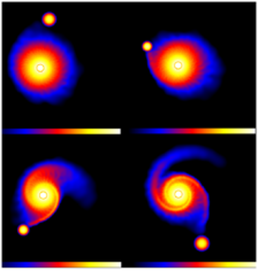 SPH simulations showing a neutron star (the small point-like object) orbiting and interacting with a massive B-type star surrounded by a circumstellar disk.

Be/X-ray binaries have an extremely large population in a nearby galaxy - the Small Magellanic Cloud and are a very helpful system in that they exhibit many of the extremes of physics that are of interest to astrophysical research.

My research is in the computational modelling of these systems and to do this, I will be using Smoothed Particle Hydrodynamics (SPH) a technique that uses Lagrangian coordinate systems. The idea in SPH is that the coordinates move with the fluid elements rather than the use of fixed grid points. It implements a smoothing length that applies different levels of interaction from nearby particles that are relative to the spacing. This means that the algorithm can “smooth” all of the properties of the fluid making it possible to resolve various computationally difficult situations.

I work with Professor Malcolm Coe and Dr. Wynn Ho from the University of Southampton. My work is also in partial collaboration with Professor Atsuo Okazaki at Hokkai-Gakuen University in Japan, as the SPH code I use was in fact developed in part by him. The development of this SPH code is also an important aspect of this project, as it can increase the speed of the simulations and add new and appropriate physics which may well be required to relate it to the real astronomical observations. As SPH is becoming a quite largely used computational technique, any development of this method is widely applicable.