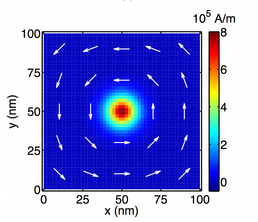 Relaxed magnetisation in a ferromagnetic sample of size 100x100×10 nm^3 (part of the calculations for the micromagnetic standard problem 5).

Different micromagnetic simulation packages exist that allow simulating ferromagnetic systems in the micro- and nanometer regime. Depending on the shape of the sample that one wants to simulate the user has to choose between finite-difference-method and finite-element method-based packages. FDM-based packages like OOMMF [1] or M³S[2] are used for samples, where the shape can be described by a regular grid of cuboids. For all other samples, the error of the demagnetization field gets too large and the user needs to use FEM-based packages like MAGPAR [3] of Nmag [4]. Now one can think of always using FEM-based packages, but the regular grid used in the FDM allows using faster algorithms like the fast Fourier transformation. The goal of this project is to extends the FEM based package Nmag by the FDM based extension Nmagfd to provide the same flexible environment for micromagnetic simulations mostly independent of the used method. Ideally the user can just switch the included module from nmag to nmag_fd and has changed the used method, without the need of porting his user-specific scripts.