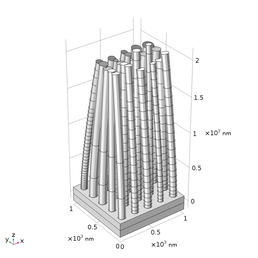 Randomly generated nanowires exhibiting the same random variations seen in real black silicon. These were generated using a custom-made, adaptive and modular set of random functions collectively referred to as the 'Degree of Randomness' (DOR) generator.

Black silicon solar cells are a novel concept in the field of photovoltaics. These devices differ from standard solar cells when it comes to their surface morphology. Short, hair-like nanowires protrude from their surface and can hold many different forms. Unlike the traditional anti-reflective coatings and pyramid surface texturing, nanowires scatter incoming light into the substrate rather than simply redirecting it. The result of this is a substrate that has extremely good anti-reflectivity; only a very small quantity light is reflected away from the substrate's surface and gives it a very dark appearance, hence 'black' silicon.

It is well documented just how random these nanowires can be, and often leaves researchers unable to explore a wide variety of more 'exquisite' form factors. With the introduction of modelling for photovoltaics, a huge number of solar cell surface morphologies can be analysed without the need to fabricate them. In all cases, this saves a lot of time and money, and strongly reinforces the understanding of those particular designs. Despite the development of such technologies, only a very small handful of models have ever been developed to simulate the nanowires on black silicon cells, each of which with varying degrees of accuracy in comparison to real experimental data.

This project will seek to correct this shortfall with an intense focus on simulating multiple 'realistic' nanowires through the randomisation of their parameters about a predefined fixed value. These parameters include:

Using the Iridis 4 supercomputer running COMSOL multiphysics, a large number of structural permutations can be simulated in parallel and at high speed, averaging the results to provide reflectance data comparable to an equivalent real sample. This level of control and analysis of black silicon through simulation will enhance the understanding of how the different structural parameters of individual nanowires change how the reflectivity of the black silicon solar cell is affected overall.