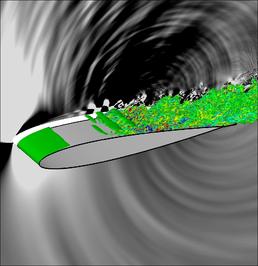 Aerofoil self noise, i.e. the noise generated by the interaction of an aerofoil with its boundary layers and wake, is one of the dominant noise sources in many applications, such as fan blades in aero-engines, flaps on airframes, or wind turbines. Typically, only trailing-edge noise is considered. In the current project, direct numerical simulations are conducted of flow over aerofoils in order to investigate the mechanisms of noise generation and potentially identify sources of aerofoil noise other than trailing-edge noise. Also, noise reduction measures such as trailing-edge serrations are investigated to see their effect on both the acoustic and hydrodynamic field.