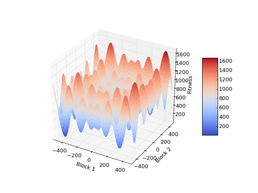 The Shwefel function is harder for hill climber than 'sexual' algorithms.

The building block hypothesis suggests that genetic algorithms can outperform standard hill climbers when problem solutions are composed of short, low order, and highly fit schemata. Compositional cooperative co-evolutionary algo- rithms also outperform hill climbers on this type of problem. This report re-examines findings by Watson and Jansen who presented a function that can be solved in polynomial time by a genetic algorithm but not by a hill climber. Their results are confirmed and compared with algorithms that use knowledge of the size of building blocks to apply crossover between those blocks and a cooperative co-evolutionary algorithm. All algorithms are tested on the royal road function, the Rastrigin function and the Schwefel function. Whilst restricting crossover to only occur between blocks does improve the performance of a standard GA, the cooperative algorithm displays the best performance over all functions tested. Recommendations are made for future work.