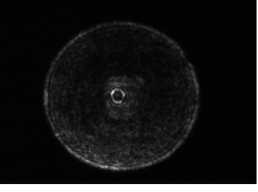 The image shows the optical interference pattern, which we use to measure the position of the particle with about 20nm spatial resolution. This is the input signal for the parametric feedback loop.

This project is at the interface of computation and quantum optomechanics experiment. In the experiment we optically trap a single particle of 50 nm size. The position of the particle is read by an optical interferometric technique. The position information is used as input into a parametric feedback loop to modulate the intensity of the trapping laser in order to stabilise/cool the centre of mass motion of the nanoparticle. This physical system opens the door to many fascinating experiments ranging form matter-wave interferometry, studies of non-linear dynamics, squeezing of the motion of the particle, thermodynamic heat engines realised by a single particle, but also include advanced sensing applications based on accelerometry of for instance gravity and magnetic resonance effects.

The pathway to implement all this experiments is to control the particle position while in the trap by optical parametric feedback. For this purpose the position of the particle is detected and fed back to a light modulator. The electronic operation of this feedback will be realised by digital electronics (FPGA), which provides an enormous flexibility to implement very different types of physics. One especially attracting idea is the implementation of a so-called Kalman filter. The Kalman makes use of the known Hamiltonian for the dynamics of the trapped particle in the harmonic trap and uses this physics to reduce effects of detection noise. However it is an advanced computational task to implement a Kalman filter from theory to practice.