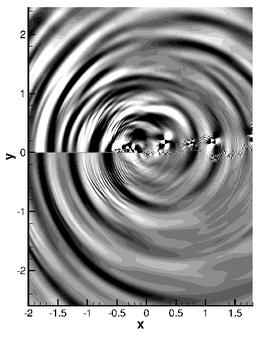 Dilatation field of a flow over a compliant trailing edge

This PhD project is concerned with trailing edge (TE) noise and measures to reduce it. TE noise is generated by the interaction between a sharp TE with pressure fluctuations convecting in a boundary layer. This source of noise can be a dominant contributor to noise produced in many engineering applications of lifting surfaces such as wings and rotating blades. Where other noise sources can be reduced or avoided by a careful design, TE noise is the only remaining noise source when an airfoil encounters a homogeneous stationary flow. Hence TE noise is the minimum achievable noise and it is necessary to reduce this noise component in order to reduce the noise generated by airframes, wind turbines and fan blades. In particular the effect of trailing-edge elasticity on the hydrodynamic and acoustic field has rarely been covered in previously published studies. However analytical studies indicates that elasticity affects the amplification of pressure fluctuations at the TE.

This project aims to investigate these effects and understand the underlying physical mechanisms through high fidelity direct numerical simulations (DNS) that are fully coupled to a structural solver.