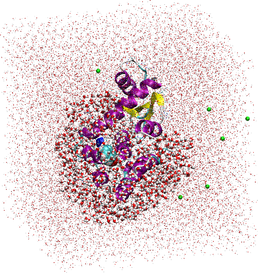 Modern computational chemistry is becoming more popular, and in the last 20 years, has expanded to a multitude of areas that impacts the rate of progress in the scientific community. Drug design, material analysis and prediction of molecular properties are all but to name a few applications, but most projects and applications boil down to one fundamentally simple question: what is the total energy of the molecular system? Conventional quantum mechanical methods are sound in principle, but require infeasible amounts of computational resources and time to complete for anything larger than 500 atoms, due to the cubic-scaling nature of the algorithms used. The Order-N Electronic Total Energy Program (ONETEP)[1] exploits the 'near-sightedness' of electronic matter with a band gap, amongst other beneficial features, to reduce this relationship to a linear-scaling approach. With the assistance of an academic supercomputer (such as Iridis or HECToR), the energy of a modestly sized protein (3000 atoms) can be calculated.

Our current task is to extend this capability by applying solvent to the system (which is true to reality). The effects of solvent contribute greatly towards the stability and activity of a biomolecule, and is therefore important in obtaining an accurate energy value. Applying the entire biomolecule, plus its surrounding solvent in a full-QM calculation is possible using ONETEP, but is far too time consuming and CPU-intensive to be useful, so a compromise has been proposed: designate the biomolecule and the first (or second) solvation sphere around the active site as a QM region, and the remaining bulk solvent and counterions as a point-charge region, where only the energy of electrostatic interaction is calculated - this reduces the penalty of calculating the solvent in a system to just 5% extra of the equivalent vacuum calculation. Validation and test cases are currently being developed and applied to prove its efficacy.

Future work will involve using statistically rigorous methods, such as extended thermodynamic cycles[2], to find the binding energy of a small ligand to a protein; a fundamental process in the field of biomedical analysis, that leads to further understanding disease and drug design.