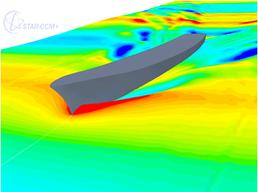 An area of research currently of interest in the marine industry is the effect of damage on ship structures. Research into the behaviour of damaged ships began in the mid nineties as a result of Ro-Ro disasters (e.g. Estonia in 1994). Due to the way the Estonia sank early research mainly focused on transient behaviour immediately after the damage takes place, the prediction of capsize, and of large lateral motions. Further research efforts, headed by the UK MoD, began following an incident where HMS Nottingham ran aground tearing a 50m hole from bow to bridge, flooding five compartments and almost causing the ship to sink just off Lord Howe Island in 2002. This project intends to provide answers to the following questions.

A ships response to damage and subsequently the ingress of water is a result of the additional structural loads imposed by the ingress and egress of floodwater mass and its motions. The current thought behind the flooding process is that it can be divided into three phases. Phase 1 occurs during and immediately after the damage event has occurred, known as the transient phase. Phase 2 is the progressive flooding phase, where the vessel gradually takes on floodwater. Phase 3 is the steady state phase, where an equilibrium situation reached if the ship does not sink during the progressive flooding phase. The transient phase of flooding is generally the most violent stage of the flooding phase. If the damage opening is on the side of the ship the floodwater can cause large motions and possibly capsize. However loads associated with floodwater are present throughout and are time dependent on many variables including damage opening location/geometry and the sea state the vessel is in.

There are several factors that affect the flooding process such as permeability of the compartment, geometry of the damage opening and the effect of trapped air inside a damaged compartment. This results in many important non-linear effects. Existing research started with a focus on capsize prediction with the early 1 degree of freedom roll models based on equations of motion, current research is now allowing motions in all 6 degrees of freedom and calculate ship motions mainly using inviscid flow theories.

Transient simulation of 2DoF Frigate motions using RANSE Currently the main gaps in existing research into damaged ship motions include inadequate prediction of roll damping, floodwater motions and motions of a damaged ship in an irregular seaway. These deficiencies are due to viscous effects involved in roll damping and violent floodwater motions. Due to the assumptions used in potential flow methods there are some important physics that are discarded in existing research. It is anticipated that a model of reasonable fidelity can be produced using a model created using RANSE coupled with rigid body motions. A model that includes viscous effects should be able to include most of these non-linear interactions naturally. This project also works alongside experimental projects from a variety of sources from which validation can be made of component parts of the damaged ship problem and of the full ship model.

Therefore the aim of this EngD research is to create a tool that can predict the local and global loads of a damaged ship in a seaway, both stationary and with forward speed. This will be combined with parallel research into the associated structural loads from the predicted hydrodynamic pressure field. From this research the important physics can be identified, and a faster method using pre-calculated data is being developed that will provide a situation assessment within seconds.

Work to date has been on perfecting simulations of smaller components of the damaged ship simulation in conjunction with experimental validation data. Right now CFD simulations of a wave tank and ship motions are being compared to experimental results in the Solent Towing Tank. Future work includes designing and conducting additional validation experiments, generating a transient model of a damaged ship in waves. Thank you to Lloyd’s Register and the UK Ministry of Defence for funding this project.