Hunting for Walking Technicolor at the LHC 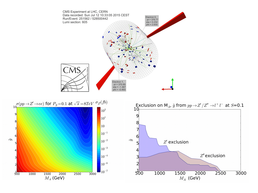 a) CMS image of a high energy di-lepton event at the LHC b) Theoretical cross section for Z' prodction and decay into the dilepton channel c) Combined exclusions on WTC from Z' and Z'' limits. All shaded areas are excluded.

Introduction – Why is New Physics necessary?

The Standard Model (SM) of particle physics is the most successful theory we have to describe the fundamental particles and how they interact. However, there are many puzzling questions that the SM cannot answer. One important puzzle to solve is why the mass of the Higgs boson is as small as we observe, the so called hierarchy problem. The quantum corrections to the Higgs mass are 16 orders of magnitude larger than the Higgs mass we observe. The SM description of the Higgs mechanism cannot explain this, and in fact we do not know from the LHC whether the Higgs mechanism itself is correct.

My Research and Results

My research focuses on a well motivated solution to the hierarchy problem called Walking Technicolor (WTC) theory, which is a complete alternative to the Higgs mechanism. WTC introduces a set of techni-quarks that interact via a new strong force, binding them together into new heavy particles. It is both important and exciting to explore, and possibly confirm, this alternative description of nature at the LHC.

I explore the full multi-dimensional parameter space of WTC and interpreting these results in the context of the LHC. This would be both difficult and very time consuming on a desktop computer, so I use the HEPMDB interface to the IRIDIS4 supercomputer to run extensive scans over the full WTC parameter space. These scans consist of upwards of a million data points, which on a desktop would take around a full month, whereas running multi-core scans on IRIDIS4 reduces this time significantly, to the order of just a few hours.

I specifically look at heavy neutral WTC particles called Z' and Z'', and calculate the probability (cross section) of observing these at the LHC, and by comparing it to current experimental limits on the cross section, I can rule out certain region of the WTC parameter space. Along with being the most updated exclusions on the WTC parameter space to date, the novelty of my result is that I have used both the Z' and Z'' to establish the first combined exclusions on WTC. The primary aim of my research is to either discover or completely rule out Walking Technicolor.