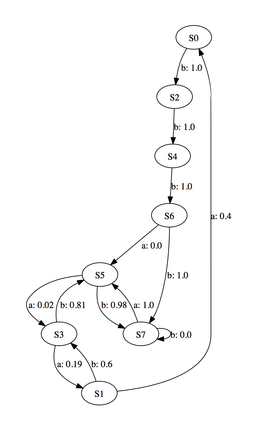 What is pattern, structure, or organisation? How can we measure it? Can we automate the process of picking out the spontaneous emergence of patterns from noise? Is it even possible to say with any reasonable certainty that the organisation of a dynamic system is increasing or decreasing?

Probably not, but we'll give it a go anyway.

From the field of computational mechanics, we have a measure of the organisation of a system, called statistical complexity. This is a measure based on how hard it is to predict the future of a system, given previous observations.

By making a large number of observations of a system, we can use an algorithm called Causal State Splitting Reconstruction (CSSR) to pick out any repeated patterns or structure in the system just by their statistical similarites. From these repeated patterns we can construct an abstract representation of the underlying dynamics of the system, called an epsilon-machine (which is somewhat similar to a finite-state automata).

However, what happens when we actually put data from a system that is becoming more organised over time into CSSR? If the changes are happening too fast, the algorithm might not have time to collect sufficient data to perform the required statistical analysis.

If CSSR is to be a useful tool in investigating the spontaneous emergence of patterns from noise, we need to better understand how it responds to such data. It may be possible to calibrate the algorithm to compensate, or to adapt the algorithm in some other way. It may be that the difficulties in using CSSR can inspire us to develop a better approach to investigating (self-)organising systems.