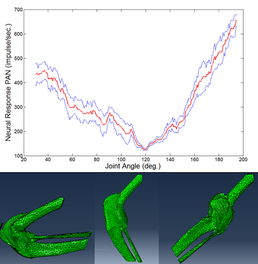 For the first stage of this project, it was necessary to develop a model that represents each of the nerve endings. The Hodgkin-Huxley model has been adapted to represent the behaviour of these four types of nerve endings. A finite element model of a feline knee joint was then developed, as most of the available data is related to the feline knee. Strains at the soft tissues of the knee joint were input to the relevant nerve model, and the individual neural response summed. This is done for a range of knee positions, so it is possible to see how the global neural response changes as the joint moves.

It is also possible to observe how the neural response changes when the knee joint is damaged. For example, on resection of the anterior cruciate ligament (ACL), the posterior articular nerve displays a significant increase in the neural response during flexion and extension. This is supported by data published by Gomez-Barrena et al (1997).