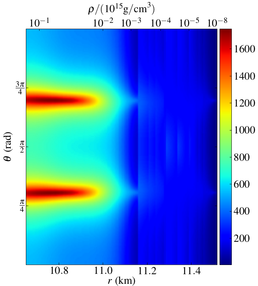 Strain distribution within the crust of a neutron star perturbed by the gravitational field of a companion.

Neutron stars are astrophysical laboratories which can be observed to see the effects of extreme densities, pressures and gravity. With a typical radius of around 10 km but a mass greater than that of the sun, the density of matter is so high that the subatomic particles can form configurations impossible in terrestrial experiments. One such configuration occurs in the outer layers of the star where neutrons can bind together into a lattice, behaving like an elastic solid: this is the neutron star crust.

The crust may have a significant impact on the observable signals from neutron stars, such as pulsar glitches, gravitational waves in the inspiral and merger phase of a binary system, and the electromagnetic waves emitted by strongly perturbed stars, such as giant X-ray flares.