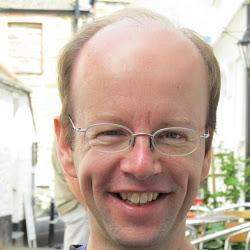 Ian is a lecturer in the Relativity and Gravitation group within Mathematical Sciences. He joined Southampton after a PhD at DAMTP, Cambridge, and post-doctoral work at the Albert-Einstein Institute in Potsdam, Germany.

His research interests focus on numerical simulations in full General Relativity, particularly nonlinear calculations predicting the gravitational wave signals that might be observed by detectors such as LIGO, and that typically result from the collapse and merger of massive objects such as neutron stars.

The physics required to study neutron stars includes the flow of fluids at extreme velocity, the behaviour of the elastic solids at very high pressures that result in neutron star crusts, their interaction with complex magnetic fields, and the effect of multiple particle species. Combined with the dynamical spacetime background, neutron stars and their evolution provide an excellent astrophysical laboratory probing realms of physics beyond what is possible on Earth.

Ian is a main author and developer of the Whisky code for relativistic hydrodynamics within the Cactus framework. This performs large-scale finite difference and finite volume simulations with mesh refinement provided through the Carpet driver on which he also works. Recent research has concentrated on the numerical modelling of more complex physical effects, including the nonlinear dynamics of multiple interacting relativistic fluid species, and the propagation of shock waves in relativistic solids.

A list of my recent publications is available here. 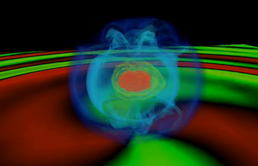 An iron core collapses prior to explosion in a supernova. The rapid rotation leads to the oblate density isocontours, and the violent behaviour near bounce leads to the emitted gravitational waves. [Ott, Dimmelmeier, Hawke, Schnetter, Kahler] 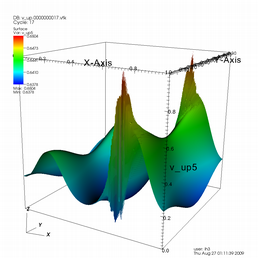 The relative velocity between two interacting relativistic multifluids. The coupling between the fluids leads to a two-stream instability, with important implications for neutron star oscillations. [Hawke, Andersson, Comer, Samuelsson]