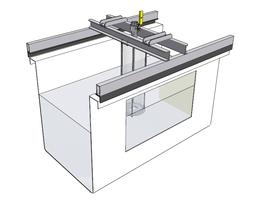 This presearch concentrates on the modelling of compartment flooding rates following the occurrence of damage in a ship's side shell. Typical state of the art flooding models use Torricelli’s formula to calculate flooding rates using a constant co-efficient of discharge (Cd). Based on Bernoulli’s theorem, turbulence and viscosity effects are not included using a Cd independent of damage shape or size. Previous work indicates that this assumption over-simplifies the problem to an extent where the flooding rates used for calculation are in error. This project will use CFD validated by experiment to calculate flooding rates for a large number of cases from which a 'krigged' response surface will be generated. Validity of the subsequent response surface will be interrogated.