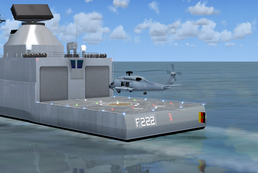 Image of helicopter landing on back of a ship in a flight simulator.

Flight simulators have a proven value in helping pilots train for difficult and unusual scenarios. More recently they have been used quite widely to assist with research, design, accident investigation, mission planning, and mission rehearsal.

Unlike fixed-wing aircraft, helicopters frequently encounter the air wakes of other objects, and sometimes their own wake.

By continuously simulating the wake of the helicopter and the airflow around its local environment, the wake interactions which lead to changes in aircraft handling can be predicted. This has been demonstrated in off-line CFD simulations. The current state of the art in piloted helicopter simulation is for the simulated aircraft to fly through a pre-computed flowfield, thus experiencing the air wake shed by another object (such as a ship).

If the local flowfield can be simulated in near real-time and the helicopter's wake is also included, then the affect of the helicopter on the flowfield is also seen. The ability to represent these two-way interactions would offer a significant improvement in the realism of flight simulators.

This project is adapting an existing LES/DNS CFD code to include a representation of a helicopter rotor. The CFD code has previously been validated for environmental flowfields and vortex dynamics. The aim is to implement a live two-way link between the CFD simulation running on a large cluster (~1000 processor cores) and a flight simulator.

Preliminary work has shown that the software and network architecture selected should enable sufficient communication between the cluster and flight simulator.

Based on previous projects and initial test runs it seems that the CFD simulation should run sufficiently fast when 500 to 1000 processor cores are available.