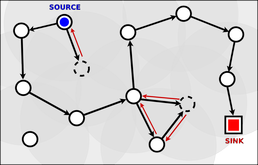 Intelligent energy management is a key challenge in Wireless Sensor Networks. Many systems and techniques have been proposed in past years in order to reduce energy waste, harvest power from the environment and generally prolong the nodes battery’s lifetime. However, the choice of an appropriate routing algorithm remains a critical factor affecting energy consumption, when trying to maximise the ef?ciency of the communication without adding unnecessary complexity to the system.

This research compares two major algorithms on the basis of energy consumption. On one hand, a ?exible reactive “?ooding” approach, resilient to failure; on the other hand, a single, optimal path proactive approach, more thrifty at the cost of increased complexity. As the network size increases, the presence of a turning point was suspected at the sides of which one system would perform better than the other.

To conduct this comparison, a simulation model has been implemented, replicating an existing energy management technique from the literature, called IDEALS. This system, implemented on top of a ?ooding algorithm, has been subsequently extended to allow the choice of a hybrid single path approach. Contrary to expectations, results collected on a range of differ- ent parameters show that the single path algorithm outperforms the ?ooding opponent in terms of energy consumption for any network size. In the new implementation, harvesting proves to be largely effective, while the impact of IDEALS, when bene?cial, is minimal.