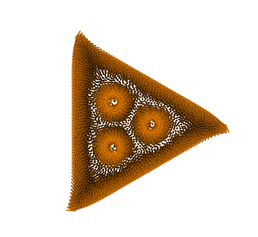 A tri-skyrmion state in a triangular geometry.

There are a number of different magnetic energy density terms in condensed matter systems which depend somewhat on the material under study. The exchange interaction, which causes neighbouring spins to align (ferromagnetism) or anti-align (antiferromagnetism), is quantum mechanical in nature and was discovered in the 1920s.

The Dzyaloshinskii-Moriya Interaction (DMI) was first conceived of in the 1970s, has it's origin in spin-orbit coupling and is present in materials where there is a broken inversion symmetry. It causes neighbouring spins to cant, so that the lowest energy state is for the spins to be perpendicular. B20 materials like FeGe and MnSi have a non centrosymmetric lattice structure which breaks inversion symmetry and so have been the subject of previous investigations into the magnetic structures which can form. Alternatively, at the boundary between two materials inversion symmetry is broken, which leads to an interfacial DMI.

Current magnetic data storage technology is based on the orientation of domains, however increasing the storage density will prove difficult. This is because thermal fluctuations can overwrite stored data, and avoiding this requires more magnetically 'stiff' materials and greater magnetic fields to write data which are not practical on such small scales. [1]

Skyrmions, named after physicist Tony Skyrme, are mathematical objects which are topological in nature and were first conceived of in Nuclear Physics. In materials with a DMI, the magnetic field configuration can form (meta)stable skyrmionic states. They are of an order of magnitude smaller than the typical magnetic domain size in a hard drive today, can be driven through materials by spin-currents and can be manipulated in such a way as to cause their orientation to reverse. Because of this, there is potential for data storage applications. [3]

In this project we will seek to better understand skyrmion properties, the manipulation of such objects and their stability.