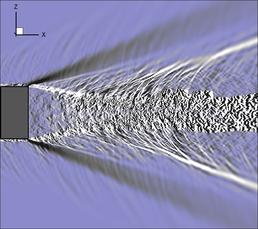 Ideally, supersonic objects would be fitted with streamlined afterbodies to avoid large drag forces. However, in many applications, such as coasting rockets or missiles, the object presents a blunt base to the flow. A recirculation region forms behind the base of the body that is responsible for a low base pressure, thus causing aerodynamic drag (base drag). Flight tests with projectiles have shown that the base drag may account for up to 35% of the total drag. The current project is focused on investigating the origin and dynamics of large-scale structures in the near wake and to devise efficient flow control measures for base drag reduction. The primary research tool is direct numerical simulation.