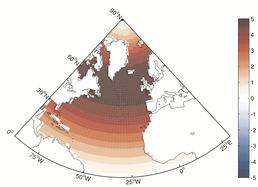 Periodic variations in air temperature over the North Atlantic.

The meridional overturning circulation (MOC) is a large-scale global circulation of water (and heat) throughout the world’s ocean. It is an integral part of the climate system, responsible for significant anomalous warming of the North Atlantic region. Much of our current understanding of the MOC is based on equilibrium theories. However, the MOC is not a steady circulation and exhibits variability across a broad range of timescales. Moreover, the MOC can respond in a highly nonlinear fashion to variability in forcing. Thus, it is apparent that traditional equilibrium theories and perturbation studies may not provide a full description of the possible MOC configurations and stability. We propose to investigate the impact of periodic variations in surface buoyancy forcing over a broad range timescales, examining the link between forcing frequency and mean circulation strength in a complex ocean general circulation model. This work could have strong implications for both the simulation of past climates and our understanding of future climate change.