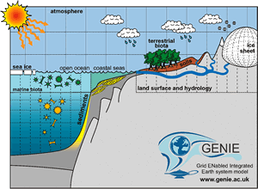 Climate science covers the physics of the atmosphere, oceans and ice sheets, along with chemistry and biology of the land surface and the oceans, from the surface to the abyss. A fundamental challenge is to understand the basic processes of the modern climate system alongside the evidence for different past climates on Earth and the prospects for future climate change. The study of climate has been transformed through a growing appreciation of the integral role that climate plays in our lives, and in particular the prospect of substantial climate change during a human lifetime. The socio-economics of climate change is increasingly important as evidence mounts for both anthropogenic influences on climate and climatic impacts on economies and societies. A wide range of computational models are used to study climate processes, climate change, and climate impacts. Due to the multi-disciplinary nature of climate problems, a correspondingly wide range of individuals and groups across the university are engaged in this topic.

Engine designers want computer programs to help them invent ways to use less fuel and produce less pollution. This research aims to provide an accurate and practical model for the injection and combustion of liquid fuel blends.

GENIE is an Earth system model of intermediate complexity. As with other climate models, the tuning of its parameters is essential for providing reliable long-term forecasts of Earth system behaviour. We apply a multi-objective optimization algorithm to the problem. The aim of the tuning exercise is to find the optimal values for the free parameters that produce and euqilibrium model end state with the closest fit to equivalent observational data.

How sensitive is ocean model utility to resolution?

One of the most intriguing problems in recent ocean modeling research is the impact of varying model resolution on model accuracy. Increasing model resolution one includes more of the important processes. However, the increase in accuracy with resolution is unlikely to be linear. Thus, as computational cost increases with resolution, a critical assessment of achieved benefits is prudent. Here we analyse a suite of realistic and compatible global ocean model runs from coarse (1o, ORCA1), eddy-permitting (1/4o, ORCA025) and eddy resolving (1/12o, ORCA12) resolutions. Comparisons of steric height variability (varSH) highlight changes in ocean density structure, revealing impacts on mechanisms such as downwelling and eddy energy dissipation. We assess vertical variability using the covariace of the deep and shallow varSH. Together with assessing isopycnal movements, we demonstrate the influence of deep baroclinic modes and regions where the barotropic flow sheds eddies. Significant changes in the deepwater formation and dispersion both in the Arctic and Antarctic are found between resolutions. The varSH increased from ORCA1 to ORCA025 and ORCA12, particularily in the Southern Ocean and Western Boundary Currents. However, there is no significant covariance between the surface and deep in ORCA1, while ORCA025 and ORCA12 show significant covariance, implying an important missing energy pathway in ORCA1. Comparing ORCA025 and ORCA12 we see significant differences in eddy energy dissipation. We assess the impact of varying model resolution on the mean flow, discussing implications to dissipation pathways on model accuracy, with reference to stochastic parameterisation schemes.

Metal organic frameworks (MOFs) has received much attention in the field of gas storage/separation, catalysis, etc, due to their highly ordered porosity, high surface area, multi functionality, chemically talorability and high loading of meta sites. Experimental method has contributed to these areas, but there are still plenty of problems not solved solely from experiment, including investigation of mechanism of adsorption and screening MOFs for target-specific applications.  In this project, we plan to use quantum mechanics and Monte Carlo simulation to investigate the various guest adsorption properties on MOFs to screen the substrates catalysed by active sites within MOFs and the influence of transition metal sites of MOFs on gas adsorption for design of MOFs with high gas storage capacity.

Drought is expected to increase in prevalence by 2050. Similarly, the use of biochar (a charcoal based soil amendment) has been suggested as a method to sequester carbon and fertilize soils without need of mineral fertilizers, and its use is increasing. We are using next generation DNA sequencing technology and bioinformatics to determine bacterial genetic diversity from soil samples which have been subject to drought or biochar amendment, to further our understanding of the impacts of environmental change on microbial communities.

STELAR-S2S will provide the first comprehensive quantification of autogenic and climatic controls on riverine sediment fluxes for one of the world's largest rivers (the Mekong), leading to new generic understanding of the relationships between climatic variability, fluvial processes and sediment flux to deltaic zones and the ocean.

An investigation into the impact of periodic variations in surface buoyancy forcing on the mean strength of ocean circulation; in particular, the Atlantic Meridional Overturning Circulation.

Entropy budgets can potentially offer new and valuable insights into the dissipation of energy in the ocean system. Specifically, if one assumes the Earth system maximises the dissipation of energy, one can use this as a guiding principle maximising the internal entropy production. In this study, resultant temperature distributions from a four box ocean-atmosphere-ice model are used to assess to what extent such considerations could ameliorate the need for tuning parameter values associated with oceanic and atmospheric diffusivity. Results from a standard implementation with fixed, empirically determined, parameters were compared to one where the maximum entropy production principle is applied to determine the value of oceanic and atmospheric diffusivity parameters. These methods have been successfully applied to cloud fraction and convection in the atmosphere.

Furthermore, the nature of the landscape of internal entropy production created by the
oceanic and atmospheric diffusivity was found to be fairly smooth, with non-linearities mainly
coming from ice albedo. Assuming the Earth system is in a state of maximal energy dissipa-
tion, applying the MEP principle successfully may depend on such a smooth, easily optimisable
landscape. Thus, the successful application of the MEP principle could be much more difficult
if attempting to aid parametrisation in more detailed ocean models, as these are likely to have
internal entropy production landscapes with local maxima. Nevertheless, results presented
are very promising, and encourage further exploration of to what extent this principle could
be applied to ameliorate the need for tuning parameters in light of lacking information.

Measurements from GPS base stations can be processed to provide estimates of the water vapour content in the atmosphere. These are lots of these base stations across the world and they take measurements very frequently, making them perfect data sources for scientific use. However, we need to understand their accuracy - and this project aims to do this.