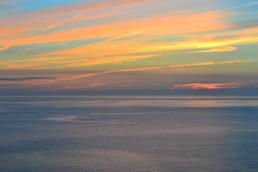 The drivers of ocean circulation remain poorly understood, despite decades of research, and are still widely debated in the literature. It is postulated that the ocean's budget of mechanical energy, comprising kinetic energy (KE), gravitational potential energy (GPE), can provide relevant insights. However, major mechanical energy sources in the ocean are still weakly constrained by observations, and not well understood in realistic climate models.

The KE energy budget of the control simulation of the coupled atmosphere–ocean general circulation model HadCM3 has been analysed previously (Gregory and Tailleux, 2011, Clim Dyn). We extend this work to look at the role of different oceanic processes on gravitational potential energy (GPE); the energy an object possesses due to its position in a gravitational field. It has been argued previously that analysing GPE alone can produce misleading conclusions (Hughes et al., 2009, JPO) and that a distinction must be made between overall GPE and the portion of this which can be converted to KE by adiabatic processes, available gravitational potential energy (AGPE).

This project attempts to reconcile these two concepts. We find that fluxes of heat and salt through the surface (principally at high latitudes) are a significant source of AGPE at the expense of background GPE, whereas interior vertical mixing results in a gain of background GPE (principally at low latitudes). These diabatic processes play complementary roles, together generating AGPE. We also note that advective processes play a dominant role in the global energy budgets, with mesoscale eddies playing an important part in closing the global energy budget. These results highlight the importance of eddy processes for ocean energetics and the need to understand their effects in an eddy-permitting models.