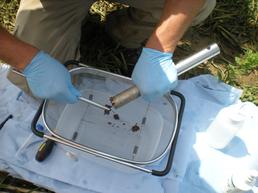 Preparation of a soil sample in the field prior to freeze drying for transport.

Soil microbial communities provide a range of vital ecosystems services, including carbon sequestration and nutrient cycling. However, due to the unculturable nature of many soil microbes, our understanding of their ecology and diversity remains limited. As climate change increasingly impacts our environment, shifts in the diversity of soil communities will likely occur, with implications for ecosystems services. We are interested in the effects of two scenarios, drought and biochar. Drought is expected to increase due to climate change, causing decreased soil moisture and variation of soil pH whilst biochar is a charcoal based product which can be produced as a by-product of bioenergy production. When added as a soil amendment biochar has potential as a carbon sequestration method, and increases soil fertility by increasing N,P and K. In addition, biochar increases soil pH, increases surface area and may be a source of labile carbon for soil microbes, although its exact effects on soil communities are not understood. Through use of next generation sequencing (NGS) technologies, it is possible to carry out metagenomic studies of environmental substrates. This comprises of the extraction of the DNA from a community of organisms and its subsequent sequencing. Using NGS methods, millions of short sequence reads can be produced for analysis. The reads are then compared with existing sequences in the BLAST database, a repository of protein and DNA sequences from previously sequence organisms, allowing identification of genes and organisms which are present in the sample. Alternatively assembly algorithms can be used to compare the reads with one another, and assemble those which overlap into longer, contiguous sequences. These contigs can then be used to more accurately explore diversity of genes and organisms. We will utilise the methods outlined above to produce metagenomes from soil samples collected from two field sites in which drought and biochar treatments have been tested. One site is a long term drought experiment, whilst the other is a biochar amendment experiment. Comparison of metagenomes from the treatment plots with control plots will enable us to determine changes in genes present and the microbial diversity of the samples, and as such provide a better understanding of possible changes in microbial soil communities under future climate change scenarios.