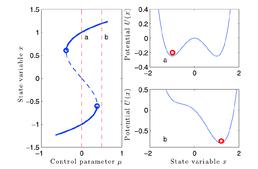 Figures from Ditlevsen and Johnsen (2010). Left figure showing a simple bifurcation diagram of a state variable as a function of a controll parameter, with two bifurcation points (blue curcles). Stable states denoted by solid lines, while stippled lines