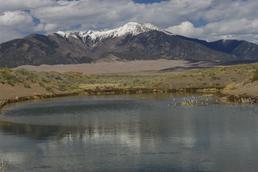 Earth surface dynamics is the study of geomorphic patterns and landforms, along with their interactions with each other and the surrounding environment. This topic includes projects examining environments dominated by aeolian, coastal, fluvial, glacial, periglacial, volcanic, etc. processes, or a combination of these.

DECAL is a cellular automaton based model which incorporated mutual feedback processes between geomorphic forcing and ecological growth to investigate fundamental controls, self-organising and non-linear behaviour in semi-arid aeolian dune environments. This project explores landscape evolution and disturbance response, developing a phase-space in which dune fields can be quantified.

The overall aim of this project is to generate a step-change in our understanding of the interactions between flow,
morphology & sedimentology within an active submarine channel fed by saline density currents. This central aim will be addressed through a combination of field measurements and innovative numerical modelling of gravity current morphodynamics

How sensitive is ocean model utility to resolution?

One of the most intriguing problems in recent ocean modeling research is the impact of varying model resolution on model accuracy. Increasing model resolution one includes more of the important processes. However, the increase in accuracy with resolution is unlikely to be linear. Thus, as computational cost increases with resolution, a critical assessment of achieved benefits is prudent. Here we analyse a suite of realistic and compatible global ocean model runs from coarse (1o, ORCA1), eddy-permitting (1/4o, ORCA025) and eddy resolving (1/12o, ORCA12) resolutions. Comparisons of steric height variability (varSH) highlight changes in ocean density structure, revealing impacts on mechanisms such as downwelling and eddy energy dissipation. We assess vertical variability using the covariace of the deep and shallow varSH. Together with assessing isopycnal movements, we demonstrate the influence of deep baroclinic modes and regions where the barotropic flow sheds eddies. Significant changes in the deepwater formation and dispersion both in the Arctic and Antarctic are found between resolutions. The varSH increased from ORCA1 to ORCA025 and ORCA12, particularily in the Southern Ocean and Western Boundary Currents. However, there is no significant covariance between the surface and deep in ORCA1, while ORCA025 and ORCA12 show significant covariance, implying an important missing energy pathway in ORCA1. Comparing ORCA025 and ORCA12 we see significant differences in eddy energy dissipation. We assess the impact of varying model resolution on the mean flow, discussing implications to dissipation pathways on model accuracy, with reference to stochastic parameterisation schemes.

Around 0.5 Billion people live in deltaic environments where they are threatened by flooding and land loss frequently. Yet, our understanding of the threats posed by land dynamic process remains limited. In this work, we try to address this issue through a land dynamic simulation of the largest and most populated of all the deltas, the GBM Delta, using the CFD software Delft3D for a range of climate change and management scenarios. The results provide new insight into the factors controlling past morphodynamics that, in turn, are helpful when assessing the possible trajectories of future evolution.

Formation of oceanic crust is an interplay between magma and the cooling hydrothermal system above that its own heat drives. To understand this system we must understand where and how water circulates through the crust.

Ocean crust is riddled with faults and other permeable pathways along which water preferentially flows. We seek to use basic numerical models of circulation in porous media to understand how much of an influence on crust formation these anomalous features have, compared to the bulk, unfractured crust.

STELAR-S2S will provide the first comprehensive quantification of autogenic and climatic controls on riverine sediment fluxes for one of the world's largest rivers (the Mekong), leading to new generic understanding of the relationships between climatic variability, fluvial processes and sediment flux to deltaic zones and the ocean.

We quantify the errors inherent in the current methods of geospeedometry, which lets one obtain the cooling rate of a rock, using mineral trace element chemistry. Calcium-in-Olivine geospeedometry is useful for deep ocean crust.

We want to use this proxy to figure out how ocean crust actually accretes, it provides key evidence as to how magma chambers and hydrothermal systems interact to produce new lithosphere. But to do so we first have to determine how reliable the method is and therefore how much can be inferred from results.

The Origin of Aeolian Dunes (TOAD)

The overall aim of this project is to understand the genesis and subsequent evolution of aeolian early stage bedforms by quantifying for the very first time the role and importance of flow, transport and surface feedbacks in the initiation and emergence of dunes. This project offers the genuine prospect of surmounting arguably the major enduring research question within aeolian geomorphology, leading to broader insights which will offer knowledge benefits for sedimentary landform studies as a whole.

Entropy budgets can potentially offer new and valuable insights into the dissipation of energy in the ocean system. Specifically, if one assumes the Earth system maximises the dissipation of energy, one can use this as a guiding principle maximising the internal entropy production. In this study, resultant temperature distributions from a four box ocean-atmosphere-ice model are used to assess to what extent such considerations could ameliorate the need for tuning parameter values associated with oceanic and atmospheric diffusivity. Results from a standard implementation with fixed, empirically determined, parameters were compared to one where the maximum entropy production principle is applied to determine the value of oceanic and atmospheric diffusivity parameters. These methods have been successfully applied to cloud fraction and convection in the atmosphere.

Furthermore, the nature of the landscape of internal entropy production created by the
oceanic and atmospheric diffusivity was found to be fairly smooth, with non-linearities mainly
coming from ice albedo. Assuming the Earth system is in a state of maximal energy dissipa-
tion, applying the MEP principle successfully may depend on such a smooth, easily optimisable
landscape. Thus, the successful application of the MEP principle could be much more difficult
if attempting to aid parametrisation in more detailed ocean models, as these are likely to have
internal entropy production landscapes with local maxima. Nevertheless, results presented
are very promising, and encourage further exploration of to what extent this principle could
be applied to ameliorate the need for tuning parameters in light of lacking information.

There is a genuine need for better, more robust modelling of suspended sediment transport in the coastal zone, both to understand its morphological evolution and it's impact on biogeochemical cycling, ecosystems services and to guide engineering applications such as dredging and defence schemes against erosion and flooding.
The suspension of sediment in turbulent flows is a complex case of fluid-particle interaction, governed by shear stresses (momentum exchanges) at the bed and within the benthic boundary layer (BBL). The intermittent transfer of momentum is a manifestation of coherent turbulent vortex structures within the flow. The passage of such structures (or clusters of) is often related to perturbations of bottom sediment, which may be entrained and maintained in suspension if sufficient turbulent energy is provided. The first part of my PhD investigated the temporal and scale relationships between wave–generated boundary layer turbulence and event–driven sediment transport in oscillatory flow in the nearshore. This involved complex statistical, spectral, quadrant and wavelet analysis of high frequency nearshore measurements of turbulence and suspended sediments (medium sand), collected as part of the EU-funded Barrier Dynamics Experiment II (BARDEX II). The following step aims to develop a 3D numerical model in OpenFOAM which would reproduce the fine scale turbulence structures observed over a fixed rippled bed in oscillatory flow. The 3D velocity field, turbulent components, correlations (stresses) and quadrant structures will then be linked to observed sediment resuspension events. The model will be validated against a set of laboratory experiments undertaken at the Fast Flow Facility at HR Wallingford.