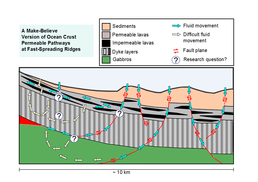 The complex structure of ocean crust raises questions about how regular crust formation can really be.

The amount of heat available to power hydrothermal circulation at mid-ocean ridges and flank systems can be roughly estimated by inference from the deficit in seafloor heatflow measurements. However, understanding and accurately simulating the locations of fluid flow and heat transfer in this system is essential to determining where heat is removed and at what local rate. This in turn is essential to understanding chemical exchange between the ocean and oceanic crust, and the mechanisms by which ocean crust cools and accretes from the axial magmatic system. The permeability structure of the oceanic crust is its most poorly understood aspect due to the technical challenges in making measurements and the unavailability of data on the youngest crust in the most critical locations.

I hope to investigate whether heterogeneities such as faults and high permeability axial slots significantly influence crustal cooling on the km scale. If this were the case examining and including these pathways in models would be essential for accurately accounting for hydrothermal heat and chemical fluxes. Along-axis recharge and discharge would become more dominant. Of particular interest is the role of ridge parallel faults in cooling the lower oceanic crust. Models of crustal cooling (that assume the multiple sill model?) require higher permeabilities in lower oceanic crust than measured in gabbros in general or in the few samples available from the Hess Deep rift (Brace, 1980; Titarenko and McCaig, 2013). High permeability fault planes may facilitate ingress and resolve this contradiction (Titarenko and McCaig, 2014), though their orientation would inhibit flow perpendicular to the axis.